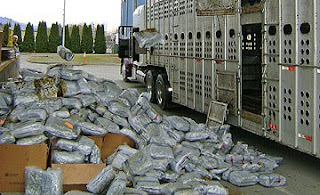 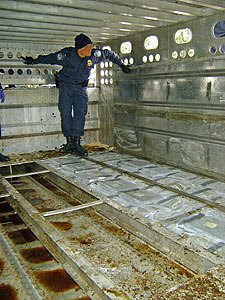 There was a $6 Million drug bust at the Canada/U.S. border which seized 1,746 pounds of high grade marijuana concealed within the floors of a cattle trailer. "Customs officers found hidden under the floor, bundles of "BC Bud", a highly potent form of marijuana cultivated in British Columbia that can sell for $3,500 to $6,000 per pound in the United States." And it's not too surprising that there is this element of corruption within the Animal Ag/Meat Industry... Especially when we know of the human rights and labor law violations. But I think there was yet another wrong committed, slipping silently under the guise of law and justice - that of apathy and (blind) social acceptance. And this is concerns the poor beings within these "livestock" cars and "food animal" transport systems. All who, by the way - get their "humane handling" training from Beef USA. (oh that's comforting isn't it?) As far as the pitiful "welfare" issues these truckers are advised of... according to the USDA's Cattle and Swine Trucking Guide there are all sorts of considerations to make these animals "comfortable" on their journey. Including the amount of time they should be expected to travel without rest/food/water: 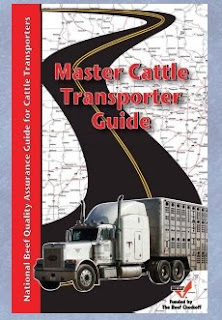 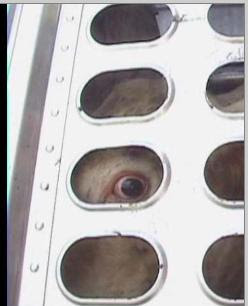 But what gives here? How does it "depend" on many factors? What happened to the mandates of the generous(1877) 28 Hour Law, which states that the maximum amount of time animals can be hauled without rest is 28 hours?

So, animal ag... meat industry... usda... beef people... livestock vets... pig haulers and cow movers... which is it? Is there a "law" or isn't there? Or could it be that these are the same laws that get flexed, bent and ignored like the other "humane" laws? After all, do we really ever expect to hear a breaking news story reporting that a truck load of pigs or cows was being diverted because they haven't been sufficiently "rested"? Yet... I guarantee you - it happens all the time. Other things that concern me about the blatant lies in livestock transport: There are windchill charts - and warnings that when it's freezing - animals will huddle together... causing the ones at the bottom and middle to be crushed... It also suggests to limit water consumption, so urine does not exacerbate the windchill... All this is meant to be so much more "humane" as they are 18-wheeled to the slaughterhouse...

And in hot weather truckers might sprinkle water on swine during transit, as it "considerably improves performance and slaughter yields." There's more issues concerning ventilation, grouping like animals, grouping pregnant animals, truck sizes, chutes and other technical matters, all revolving around the bottomline of course. And there's the "humane euthanasia" that these truckers are expected to employ. If there is a sick or injured animal - (amongst the 300 or so) the driver is supposed to contact a vet (in the middle of a thousand mile trip) to aid the suffering animal. Or, he's supposed to tend to this animal himself.

R-I-G-H-T... I can just see it now... Joe Truckdriver, delaying the trip by hours to call a vet in an unknown nowhere... OR- stopping his route... risking life/limb to tend to the suffering of number 389-5x cow, or #84q5 pig... That's such crappy-dung! But of course they won't do that - it's not safe and it's not profitable... Just like the bleed rail... nothing shuts it down - Nothing. And here's more about the ins and outs of loading a dying animal on to a truck if it must be transported with the other animals - Fork lifts that could be used... wenches, and so forth - (trying to avoid further injury of course). But doesn't that contradict not proceeding if there's an injured animal? We're not supposed to roll, unless every one's healthy... Right??? Or which is it? Or is it anything that gets your "product" to the market, good enough to be killed. And "alive" enought to be processed into your little greasy sausages and bloody burgers that will do? Animal ag- meat industry... Your driver smuggling in the pot - is rather harmless in comparison to you who openly disregard pitiful "regulations", who offend and openly murder - all under the protection of archaic "law" and public ignorance. Go Vegan

Who knows where to download XRumer 5.0 Palladium?
Help, please. All recommend this program to effectively advertise on the Internet, this is the best program!