A recent investigation of China's cat-meat consumption has just been released:

"For many Chinese people - especially in the country's south - eating cat is a perfectly normal tradition. We visited a restaurant in the city of Guangzhou that specialises in what the Chinese call 'wild taste'."

"The waitress showed us cages full of live animals - turtles, snakes, pheasants and domesticated cat. A chef tried to sell us a dish called Dragon, Tiger, Phoenix - a stew of snake, pheasant and cat meat. It is also highlighted divisions between China's new middle class - for whom having a pet is a status symbol - against those here who are themselves struggling to survive, and see no need for animal rights.

Cat protection groups have sprung up in cities across China. Frustrated by their government, they stage their own raids - storming into restaurants and markets, attempting to shame people out of eating cat.

Sky News has obtained video footage from one recent raid near Shanghai, where campaigners tried to hold up a truck-load of cats being shipped to market. They released traumatised animals from cramped wooden crates, while a horrified crowd looked on. But when the police arrived, they backed the cat dealer. In China, there is no law at all against animal cruelty. The trader even had a certificate to prove what he was doing was legal." 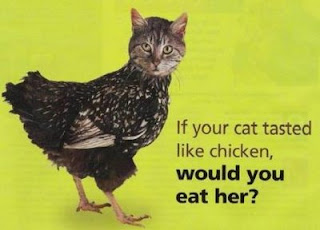 Many of these cats as the article states were once adored pets... stolen and sold at markets and food establishments. It has little to do with "poverty" as these cats are being prepared by "chefs" and served in restaurants. And by all accounts what is the difference? A cow, a pig, a bird - dog or cat... they are all animals - just as are we.

People will call the Chinese "barbaric" in their choice of "food animals"... But all flesh eating is the same... justified by habit, tradition, culture, religion, misinformation (or deliberate ignorance) about "protein". And is perpetuated in the easy money made from the animal/meat traders. Eating cats, dogs, horses, squirrels, kangaroos, deer, turtles, dolphins, tigers, lions, etc... is hardly any different than the "civilized" world where turkeys, lamb chops and ribs are consumed. None of it is "necessary". Man can thrive on a plant based diet. And it is this unwillingness to replace the sausages and burgers that a camaraderie with feline and canine munchers can be found.

No need to cast stones on a plant based diet... all animals are safe. Choose compassion - Go Vegan

Western society sees the killing of cats for food as "barbaric" yet see no problem in the daily mass slaughter of cows, lambs, pigs and whatnot as perfectly acceptable. It's probably the biggest form of hypocrisy I can think of... (and I've eaten kangaroo in the past)

A friend of mine once bought a cat at market in China to take home as a pet only to have it's neck snapped in front of her and stuffed in a bag! :o

Oh what a horrible story!... your friend and the poor cat -

And your right about the hypocrisy between our choice to pet some animals and eat the others... All the while each is as wonderful and deserving of life as the next. I don't know how long a society can exist with such contradictions. But I think the unraveling is close at hand :)