So you take a little bit of pig poop - 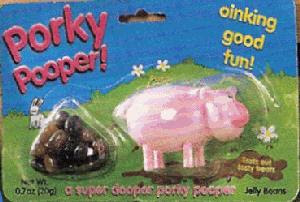 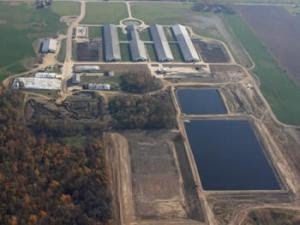 Alright... so you take a lot of pig poop... Store it in huge lagoons and reuse it to "clean" the pig barns... 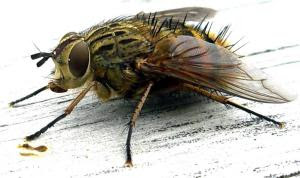 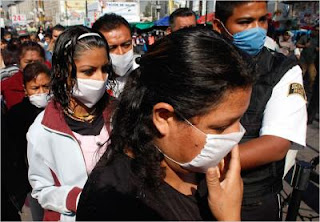 ...add a fly and you have: The illness started in Mexico - and many are attributing the outbreak from flies which frequent hog CAFO's (concentrated animal feeding operations). The disease vector is a type of fly that reproduces in pig waste and breeds in manure lagoons on pig farms. Mexico's health minister says the disease has killed up to 86 people and likely sickened up to 1,400 since April 13. U.S. officials say the virus has been found in New York, California, Texas, Kansas and Ohio, but so far no fatalities have been reported. In response to the developments in North America, countries around the world planned quarantines, tightened rules on pork imports and tested airline passengers for fevers as global health officials tried Sunday to come up with uniform ways to battle the outbreak. Nations from New Zealand to France reported new suspected cases and some warned citizens against travel to North America, the AP said. In Mexico, the government has ordered schools closed and all public events have been suspended for the time being, including more than 500 concerts and other gatherings in the city of 20 million residents. Even churches stood empty Sunday, the AP said." Because of the situation, the World Health Organization planned to consider raising the world pandemic flu alert to 4 from 3. Such a high level of alert — meaning that sustained human-to-human transmission of a new virus has been detected — has not been reached in recent years, even with the H5N1 avian flu circulating in Asia and Egypt, and would “really raise the hackles of everyone around the world,” said Dr. Robert G. Webster, a flu virus expert at St. Jude Children’s Research Hospital in Memphis. "Is Smithfield Foods, the world’s largest pork packer and hog producer, linked to the outbreak? Smithfield operates massive hog-raising operations Perote, Mexico, in the state of Vera Cruz, where the outbreak originated. The operations, grouped under a Smithfield subsidiary called Granjas Carrol, raise 950,000 hogs per year, according to the company Web site—a level nearly equal to Smithfield’s total U.S. hog production." "The article goes on to say that area residents have long complained of “fetid odors” in the air and water, and swarms of flies hovering around waste lagoons. Like their counterparts who live in CAFO-heavy U.S. areas, they also complain of respiratory ailments. Now, with 30 percent of the area’s residents now infected with the virulent flu bug, people are demanding that state and federal authorities inspect hog operations there." WASHINGTON -The U.S. declared a public health emergency Sunday to deal with the emerging new swine flu, much like the government does to prepare for approaching hurricanes. Officials reported 20 U.S. cases of swine flu in five states so far, with the latest in Ohio and New York. Unlike in Mexico where the same strain appears to be killing dozens of people, cases in the United State have been mild — and U.S. health authorities can't yet explain why. Homeland Security Secretary Janet Napolitano, "roughly 12 million doses of the drug Tamiflu will be moved from a federal stockpile to places where states can quickly get their share if they decide they need it. Priority will be given to the five states with known cases so far: California, Texas, New York, Ohio and Kansas." "We're preparing in an environment where we really don't know ultimately what the size of seriousness of this outbreak is going to be."

The current WHO phase of this pandemic alert is 3.

"This virus has, clearly, a pandemic potential," says Margaret Chan, director general of WHO. Why? The new strain spreads quickly and efficiently from human to human. It's "a completely novel virus," says the CDC (Centers for Disease Control and Prevention). This latest variant is a mixture of human virus, bird virus, and pig viruses from all over the world. Experts say it's particularly worrisome because people are getting sick without any encounters with pigs. Even worse, young, healthy people (ages 20-40) are dying at a striking rate, a telltale sign of the worst flu epidemics.

So... perhaps we may come to learn that pigs inside of buildings are a bad idea? That storing millions of gallons of manure (thousands of times over again) isn't a good thing either? Perhaps indeed some may come to realize the animal agriculture is just not sustainable and is a potential threat to human health in more ways than we can realize of yet? Perhaps it is time to Go Vegan

Wow, Bea! That is just appalling!!!

With all that goes on - I'm so sorry I didn't make the switch a long time ago... I hope you wind up just as pleased with your choice! Good luck & keep us posted - please! :)

Thank you Bea for this post.
I am 26 years old and have not eaten meat for 5 years now. It is odd really, because it was one of my pre-med courses, titled Infectious Diseases, that made me rethink my choice to eat meat. I remember the professor going over H1N1 and why it is such a very real possibility that we see a new strain go pandemic, given the truly appalling way the meat industry "raises" animals. It is so sad that these factory farms profit off of animal cruelty and consumers are oblivious to it.
I can only hope this moves the spot-light onto Smithfield Farms and other farms like it so we can learn from these mistakes before an even deadlier strain arises.