Barbara Walters Vegetarian View - Thanks to Molly the Cow 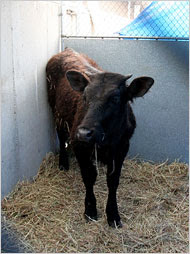 According to the New York Times a 350-pound heifer escaped her trip to the slaughterhouse via the streets of Queens. She was pursued through the city streets until after about a mile she was captured:

"The heifer went through a wide gate into the front yard of a house. She then went to the back of the house, crossed a weedy patch, climbed over some broken cement pieces and got trapped in the space between the fence of one house and the stone wall of another. Officers eventually lassoed the animal with a rope, witnesses said. The police said a tranquilizer dart was fired at the heifer to subdue her. Adam Khan, 47, a truck driver who lives in a house near where the calf was captured, said the episode “tells you something.” The heifer, he said, “didn’t want to get killed.”

Of course this is true... every being wishes to continue life. Molly is no exception. A poll was conducted at the New York Daily News which shows that 83% of the respondents also took empathy with the calf. Including Barbara Walters who in reaction to the poor cow's plight, announced on The View that she's contemplating a vegetarian diet.

The results of this poll is no surprise... Similar studies consistently show that people are not in favor of promoting an animal's death. Why is it that we then can look away from the billions who are slaughtered every year?
Perhaps Ruth Harrison said it best:

If one person is unkind to an animal it is considered to be cruelty, but where a lot of people are unkind to animals, especially in the name of commerce, the cruelty is condoned and, once large sums of money are at stake, will be defended to the last by otherwise intelligent people.

So too it is that we look upon one animal with compassion but simultaneously ignore the billions of others in a much worse fate.
We can and should be mindful of all... for surely no being wishes to be killed, and there is no need to do so. Go Vegan