Religious attitudes to Copernican heliocentrism: The King James Bible states that "the world also shall be stable, that it be not moved." Psalm says, "[the Lord] Who laid the foundations of the earth, that it should not be removed for ever." Ecclesiastes states that "The sun also ariseth, and the sun goeth down, and hasteth to his place where he arose." 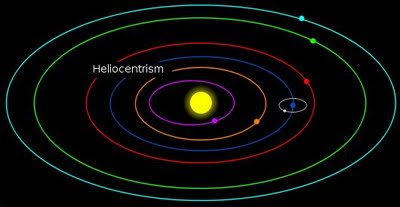 And after many centuries the theories of astronomers, scientists and stargazers all came to be accepted by the church, educators and the culture. Indeed acknowledging that Earth was not the center of the universe allowed other concepts such as gravity and lightspeed to be discovered.

And so too consider this:
"For four thousand years, a thick and impenetrable legal wall has separated all human from all nonhuman animals. On one side, even the most trivial interests of a single species — ours — are jealously guarded. We have assigned ourselves, alone among the million animal species, the status of "legal persons." On the other side of that wall lies the legal refuse of an entire kingdom, not just chimpanzees and bonobos but also gorillas, orangutans, and monkeys, dogs, elephants, and dolphins. They are "legal things." Their most basic and fundamental interests — their pains, their lives, their freedoms — are intentionally ignored, often maliciously trampled, and routinely abused. Ancient philosophers claimed that all nonhuman animals had been designed and placed on this earth just for human beings. Ancient jurists declared that law had been created just for human beings. Although philosophy and science have long since recanted, the law has not."
Rattling the Cage "The Problem with Being a Thing" by Steven Wise
To those who refuse to relinquish their priviledge of might over reason I implore you... Allow us to advance as a species. Discard this abusive and archaic notion that we are "better" or "best" than Others simply because we deny to acknowledge that other species have a right to their own purpose.
I realize contemporary thought wants to claim that all we have we owe to the use of animals as resources. That the taking of them and their slavery and flesh has meant our very survival. But I present this view that no one has any idea how much better off we would be as a civilization had we chosen different means. No one can say for certain that our present existence is the apex of what might have been had we shifted our technology and abandoned the primitive use of nonhumans.
And I don't know... Is the world in such fine shape? On a grand scale there's global warming, droughts, depleted oceans, species extinctions, melting polar ice caps, deforestation, and many other plantetary issues. And within our own species we have pandemics, famine, obesity, antibiotic resistance, wars, corruption, violence and crime... Can anyone really say that another path might not have been better?
Likewise, not one can say for certain how much more advanced we would be if human slavery had not anchored our progress. Or wars. And if man is indeed "the best" and "superior" don't we owe it to ourselves to find a better way beyond the violence and the killing?
I leave the last words on that subject to David Brion Davis: Considering that slavery had been globally accepted for millennia, it is encouraging that people were able to make such a major shift in their moral view, especially when a cause like abolition conflicted with strong economic interests. We can still learn from history the invaluable lesson that an enormously powerful and profitable evil can be overcome.
AN ARGUMENT FOR THE BASIC LEGAL RIGHTS OF FARMED ANIMAL Steven M. Wise
TOWARD A NON-PROPERTY STATUS FOR ANIMALS Thomas G. Kelch
We don't need to keep the animals any longer... They have "served" us enough -

I consider myself a peacemaker. I wish to end the violence between races, sexes and species... Do you care to tell the "answers" of how this is to be done?

How do you get people to care about "the other"?
Thanks for your input.

Hey Bea! Sorry I haven't been around for a while but don't worry, I haven't disappeared off the face of the planet. And yes, I'm still chowing down on those vegies! :) Haha!

Loving that video, I might have to show it to my science students to open up some discussion when we do food and farming topics.

Oh and I've posted a few quick previews of some of my wedding photos on my blog (which I have been lazy and not updated in ages).

Hi Klem! Wonderful to hear from you again. And no! I just don't believe you have been "lazy"... just rightfully distracted by a new bride! :0)

I'm Soooooo happy for you! Will go on over now to see who the lucky lady is!

And again... Contrats! A super long & happy marraige to you both!