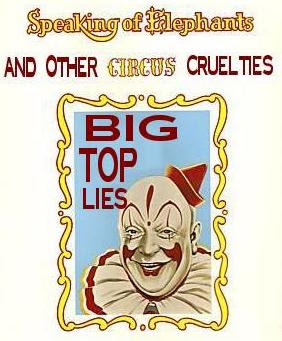 I'm vegan because I discovered
the truth about circus animals. I never thought they were harmed or abused. I really never thought about anyone deliberately harming any animals at all!
Yes, I know this was naive, but like others I was always lead to think that we were kind. And I was taught to treat others as I would like to be treated. I never connected that our species excludes every other one except our own...

I have since found that circus animals, like all animals used for entertainment are usually stolen 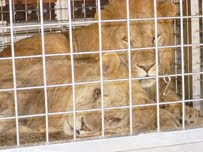 from their homes and removed from their parents often at birth. They are confined for endless hours and made to travel is tiny boxes, released only for training which is cruel and physically brutal...
All animals in entertainment are made to "perform" or "compete". Rodeos, most zoos and aquatic parks all exploit animals so they can make money selling tickets to an unaware public. Once I connected the commodification of animals to profit, it made me examine my eating habits as well... Was I being duped by the same "humane" mantra as the entertainment world? Absolutely! 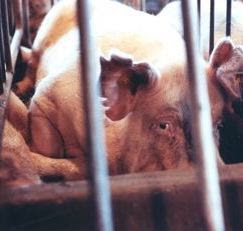 Animals raised for food are kept in crowded filthy warehouses. Their waste pollutes the environment. And feeding these billions of animals is terribly wasteful on resources too.
I never knew the animals used for food were so young. Or that their bodies were so painfully mutilated to fit in the scheme of "productivity". But like all animals used as production units - their needs and rights are always denied.
After I realized this... along with many, many other things, I knew I had been blinded by a culture that chose to show it's self as benevolent and kind... But was anything but. I decided to eliminate meat, dairy, eggs and all purchases that involved the exploitation of nonhumans.
I learned that there are delicious alternatives to foods that weren't healthy for me anyway! I've been able to replace almost everything in my life with a kinder, more thoughtful choice. I'm happier for this decision and try to encourage everyone I know to research what we are really doing to animals. The needless experimentations, the foolish frivolities that cause so much pain and suffering. The enslavement of innocent creatures who have only us to speak for their interests. I know their interests and their RIGHT is to live without exploitation. This is why I am vegan... Why aren't you?
Go vegan - do it today!

Bea! I am surprised at the various reasons one realizes that veganism is the correct lifestyle! I, too, never considered the inhumane treatment of animals before, (Not realistically, anyway)until I became a fullfledged vegan.

The way humans disconnect themselves from the realities of the horrible treatment and attitudes we humans have towards animals is really sort of unnerving now. But, I deal with it.

The term "speciesism" is a relatively new concept. But, I think that people will begin to see it for what it is very soon. The vegan movement is only going to snowball...

Hi Bill - Totally agree that the exposure of the unjust way we treat animals is only beginning. And that the consequences of our awakening will inevitably bring the changes we all seek...
It's just a matter of time.

Thanks for dropping by - And for all your advocacy!
Peace back at you :)
Bea