See How Animal Producers Do Their Job!

I'd like to refute this from the pork people: "The biggest issue we face is that the American people are so far removed from agriculture and the way livestock and their meat is produced that they accept the emotional arguments which are not fact-based that the animal rights groups use to pass legislation to restrict the way producers raise animals," Stallman says. "We do care for our animals. We would not be successful otherwise and we do take care of their welfare. We just have to do a better job of telling that story to a public that really doesn't understand much about production agriculture." The biggest challenge for those who produce "meat" is that more people now know how those animals are raised than ever before. A mere decade ago this information was not available... Consumers had to rely on what images they were given that would prevent "emotional" entanglement or question... Technology has given everyone the opportunity to get all the facts they need with a few Google searches. And too the marvel of living today is that it's never been easier to eliminate animals from one's diet or lifestyle. There are so many healthy and tasty alternatives to choose from... A simple Google search will pull those up too! So Animal Rights activists will continue to tell the story, as I'm sure the livestock deadstock industry will as well. But here's the rub... Animal ag industries say they "care" about animals, and this is the result: 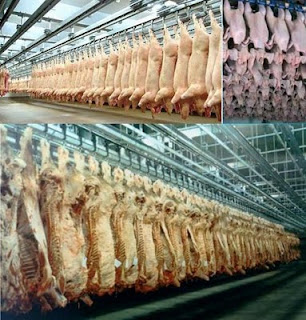 Likewise, Animal Rights activists say they "care" about animals, and proceed this way: There's nothing "emotional" about it! We can thrive on a plant based vegan diet! The killing of animals is neither kind nor necessary. We are more informed than ever to make this choice - and to know that it is the right thing to do...

Aren’t humans amazing Animals? They kill wildlife - birds, deer, all kinds of cats, coyotes, beavers, groundhogs, mice and foxes by the million in order to protect their domestic animals and their feed.

Then they kill domestic animals by the billion and eat them. This in turn kills people by the million, because eating all those animals leads to degenerative - and fatal - - health conditions like heart disease, stroke, kidney disease, and cancer.

So then humans spend billions of dollars torturing and killing millions of more animals to look for cures for these diseases.

Elsewhere, millions of other human beings are being killed by hunger and malnutrition because food they could eat is being used to fatten domestic animals.

Meanwhile, few people recognize the absurdity of humans, who kill so easily and violently, and once a year send out cards praying for "Peace on Earth."

Check out this informative and inspiring video on why people choose vegan: http://veganvideo.org/

Until I tried it, I never realised just how many alternatives there were out there waiting to thrill my taste buds. Google is most definately your friend. Plus every time I visit your blog I can't help but stare at the animal kill tally on the right just soaring away.... :/ That's lot of chickens!

...recognize the absurdity of humans, who kill so easily and violently, and once a year send out cards praying for "Peace on Earth."

Wow I like that! Going to have to remember that one for future reference!

been a vegan for 25 years and never felt better both physically and spiritually..........knowing that I'm not eating innocent, tortured animals makes me feel happy. Knowing that billions of others can't wake-up to their spiritual ignorance towards animals reminds me that this road is still the less traveled one....

The biggest challenge for those who produce "meat" is that more people now know how those animals are being fed a diet of lies, half truths and emotion laden propaganda by people like you who know nothbing of what goes on in the livestock industry.

Animal rights people like yourself have embraced the communication revolution in a way that farmers have been unable to. Most farmers understand less about blogging and tweeting than you do about caring for animals. Why? Because they're too busy surviving and taking care of their stock.

@vegaia - Thanks for posting that quote from Coates. It's so tragically true. We cannot reach for the olive branch while holding a butcher's knife. :(

@Klem - I'll admit it in public - Up until recently I never even tried "butter beans" or "chick peas" (among many other delicious veggie foods) - Two years ago I would have turned my nose up on "black bean burgers" - Now... they are my "specialty" & my freezer is full of them!

Haven't perfected "veggie lasagna" yet - But working on it! :)

@amber - The road might be less traveled --- But it is going in the right direction!

"Because they're too busy surviving and taking care of their stock."

The fastest growing food industry is for plant based products... Maybe they should change their line of "wares"?

Hahaha! Funny you should say that Beas as I've actually got a veggie lasagne I made in the oven right now! I'll let you know if it's any good. :)

Hi Klem! I have an Italian soul! I love all things pasta... always have.