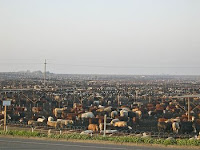 Gosh this summer is a scorcher!  The heat index in some parts of the country is up to 115 degrees.   It's easy to see why someone leaving their air conditioned home, to drive in their air conditioned car, to shop the frigid meat isles in their air conditioned grocery store might not be aware that thousands of cows are being cooked live under the blistering sun in feedlots.  Those that aren't killed are crowded into giant steel boxes to be driven sometimes for countless hours to their final destination.  The insides of these transport trucks can also exceed 130 degree temperatures as well.  All this of course is to bring fine folks their "humane" shoulders, ribs, rumps and steaks... 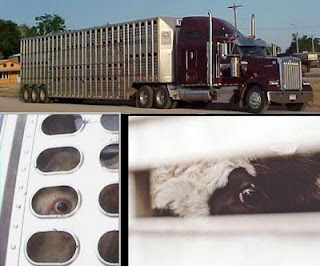 What I don't get is this:  If someone leaves their dog in a situation which causes them to suffer from dehydration and die of heat exposure, most people would call it cruel and irresponsible.  It would be neglectful and is illegal.

Yet, when ranchers cause the same types of deaths to thousands... They are financially compensated  (with tax dollars), and society shrugs it's shoulders as a matter of little importance.

So why cry for one "little doggie" and turn all compassion away from the others?
Maybe it's something to think about next time you're cruising the wide open spaces of your supermarket's frozen dead animal parts section?
You do have choices to NOT participate in these deaths and killings you know...

Thanks for the affirmation veganelder... Appalling for sure. :(