The life of a turkey is filled with suffering that you and I cannot fully imagine.

Thanksgiving is the celebration of a dual genocide: one against native people, and one against turkeys.

The first Thanksgiving Day celebration in 1637 was proclaimed by the Governor of the Massachusetts Bay Colony, not as a festival of the Pilgrims and Indians sharing a meal to celebrate the cooperation between the two communities, but as a celebration of the massacre of 700 Pequot men, women and children.

If anything the first Thanksgiving was the kickoff to the systematic obliteration of a race of people that continues to this day, and is evident in the disproportionate poverty, poor health, and unemployment levels. Native Americans living on reservations have the highest rates of poverty, unemployment, and disease of any ethnic group in America. 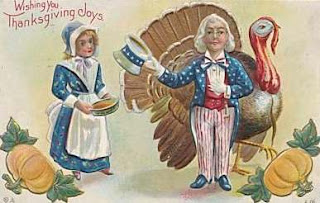 This does not sound like anything to celebrate or be thankful for, but in some great cultural conspiracy, we’ve been manipulated to believe Thanksgiving is a day to spend with loved ones in a state of patriotic fervor while devouring shameful amounts of calories.

The life of a turkey is filled with suffering that you and I cannot fully imagine. The majority of turkeys for your Thanksgiving table are raised in warehouses where they will never see the light of day, and allotted three square feet of space to live their abbreviated life. To prevent them from injuring each other in such cramped quarters, most turkeys have one-third of their beaks seared off with a red-hot blade, and their toes cut off, all without painkillers and all within the first few days of their lives. It is also typical to cut off their snoods, the fleshy appendage above the beak, with scissors.


These naturally sweet and social animals are unable to engage in normal turkey behaviors such as perching, dustbathing and sunbathing. Mothers and babies begin to bond while the baby is still inside the egg, as do chickens. When inside the egg, little turkeys are already able to vocalize and “talk” to their mothers. Young birds are completely dependent on mothers, and their absence renders commercially bred turkeys helpless. Sometimes they cannot find food or water because no one ever showed them how. Turkeys often form strong bonds with each other as well, sometimes with other animals. They do not have the ability to do so in crowded warehouses.

Since they have been genetically manipulated to develop extremely large breasts in a short period time, they grow so awkwardly large that they are unable to hold up their own weight. Because of this they are no longer able to breed naturally, so females must be inseminated through rape. This also causes serious health problems like heart attacks and organ failures, however, most turkeys never live long enough to experience these issues since they are slaughtered at around five months old. (Yes, you are eating a baby bird.)

If you feel smug about only eating free-range turkey, there is very little difference in how the turkeys are treated on these farms. The term “free range” only means turkeys are allowed outside 51 percent of their lives. They don’t live idyllic lives on a farm, as the term implies.

Free-range turkeys are also genetically manipulated to grow unusually large and still undergo the same tortures as factory-farmed turkeys such as debeaking, detoeing and desnooding.

Whether a turkey comes from a free-range farm or a factory farm, they all undergo horrific conditions on the way to slaughter. Turkeys are gathered up and carried upside down by their legs and thrown into crates on transportation trucks. Most trucks have no protection from the weather, whether that be extreme heat or cold, and are usually denied food and water in transit. All turkeys end up at the same slaughterhouses where they are hung upside down by their legs and dipped in electrical baths to “stun” them. If they are not stunned, their throats are slit while they are still conscious. There are many occasions where they miss the hot bath and the blade, and end up plunged alive in scalding tanks to remove their feathers. It is all perfectly legal, since birds are exempt from the ironically named “Humane Slaughter” Act – ironic in the sense that of course there is no such thing as humane slaughter of humans or non-human animals.

I have a difficult time experiencing gratitude on a holiday that celebrates and worships the dual genocide of a race of people and a species of animal.

If you wish to truly express and share gratitude on Thanksgiving, how about choosing to eat a vegan meal? There are a myriad of satisfying and cruelty-free seasonal vegan recipes on the internet.

How about taking some time to meditate on the genocide of the Native Americans? Or kick off your holiday meal with a reading from A People’s History of the United States by the late, great Howard Zinn.

Instead of being forced to spend the holiday with shirttail relatives, feeling faux gratitude, take back Thanksgiving and celebrate the fact that your Thanksgiving has been respectful of people, animals, and the planet. I know that I’ll be grateful.
Grace:


Thanks to the original post Thanksgiving: A Celebration of Genocide by Gary Smith

Sad and disgusting. I have been finding myself feeling more and more down as this anniversary of horrors approaches.

I try to tell myself this is the time of seeing the plants say goodbye for their winter sleep...and thank them for their colorful leaves and such. Much better than "celebrating" the events you write about so well in your post.

What a lovely way to see it... The plants sleeping for the winter!

I find this time of year, or rather this particular "holiday" most upsetting... The whole of it is anchored in lies, greed and brutality. :(((

-Happy ThanksLiving to you anyway veganelder... May we all find comfort in the light of truth.

Thanks Bea and please enjoy your holiday....and...if possible...treat the fur, the feather and the fin people you know to something special.

Thank you, thank you, thank you Bea for pointing out about the free=range (ha!) farming. I was SO STUPID as to believe the free-range egg garbage and only gave them up early this year. How on earth I believed that I don't know, but I did. Well, I do know. There is a big campaign where I live (Germany) that promotes it: Kein Ei mit Drei - No egg with 3 - the number 3 being stamped on cage eggs and a whole promotion about how free-range eggs come from happy chickens. Not true as I've found out. But back to your post. It is so thoughtful and well-written and I wish that every US citizen knew the truth. The only reason I know about what happened to the Natives is because I have a Lenape ancestor on my father's side and so am interested in Native peoples for that reason. Sad, sad story, our Nations history. Yep. Thanksgiving as we know it is a load of garbage. This "holiday" needs a major image overhaul - it's TRUE image needs to be exposed. ... You might remember me from comments on Vegan Elder's blog. I really like your blog too! I'm going to bookmark it and will look forward to reading what you write.

Thanks veganelder... I ate twice as much as I should have - But no one had to die for my gluttony... The only punishment was a too full tummy and I recovered quickly! :)

Hi Krissa... Of course I remember you! Don't beat yourself up for not being aware that your were deceived. The animal industries make such a point at keeping their dirty lies a secret. It takes a very astute consumer to figure out the truth. I admire you for doing so!

Since you have Native ancestors you might be interested in this article from The International Vegetarians Union that elaborates on the historical significance of the food choices American Indians made and how that too has been compromised by modern "western" interests:
http://www.ivu.org/history/native_americans.html

I'm happy you find my (sometimes cynical) words of interest... If nothing else I'll always be honest about the absurdity of it all. ;)