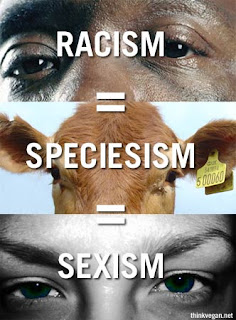 Animals Rights is Now a Mainstream Movement Newsweek International Newsweek.com: "Many people see this movement as a logical continuation of the fight against racism and sexism, and believe that the concept of animal rights will soon be as commonplace as equal pay and opportunities for women and minorities. If that happens—and I believe it will—the effects on the food we eat, how we produce it and the place of animals in our society will be profound. As the demand for animal products dwindles, the meat industry would breed fewer chickens, turkeys, pigs and cattle. If this sounds radical, so did suffrage and civil rights a few decades ago. The notion that we should recognize the rights of animals living among us rests on a firm ethical foundation. A sentient being is sentient regardless of which species it happens to belong to. Pain is pain, whether it is the pain of a cat, a dog, a pig or a child." Yep... that's the idea and surely we can start in that direction as individuals and attempt to square up our moral alliance with animals NOW - by going vegan - NOW.

Ahh, Peter Singer, the great humanitarian - advocate of aborting or even killing young children with developmental problems. Any movement that heralds such a 'philospher' as their spokesman is so morally bankrupt to be laughable.

Please - From your previous comment I can see that you are a representative from the "meat culture" if not the meat industry itself. There is a world of difference in aborting an (unviable) fetus and deliberately growing billions of animals for slaughter. I would take your judgement of a morally bankrupt philospher if the meat institute had any credibility in ethical matters. Alas, it becomes somewhat akin to a kettle calling itself "immoral". Good day.

You are clearly unware of the breadth of Singer's philosophy if you believe his stance on abortion is limited to 'unviable' fetuses. Those are your words not his. In his thinking, snuffing out the life of a six month old child because they may be in pain and suffering is morally justifiable.

What a wonderful man to have leading the animal rights movement.

I've read their verbiage which re-hashes the same incongruant thought: "We must communicate to the consumer that we treat our animals humanely...(before we butcher them, that is)". Most clear thinking people see right through that contradiction. It is only a matter of time till enough declare the emperor to be naked of the moral egis they so desperately wish they had.

The meat industry and animal agriculture sir/madam hasn't got an ethical leg to stand on...

"In his thinking, snuffing out the life of a six month old child because they may be in pain and suffering is morally justifiable."

Interesting, you would disagree then anonymous. A child in a persistent state of pain ought to have their life prolonged because she has been ensouled.

I find this line of reasoning atrocious. Prof. Singer is concerned with suffering, he would therefore like to remove irrational barriers and allow parents the opportunity to end the lives of their children if they are suffering from extreme pain, and have no hopes for improvement. Likewise in the case of some elderly members of our community, whom he believes euthanasia ought to be a reasonable option.

You would disagree, opting instead for the persistent pain. Where then, do you find grounds to criticize? One voice in this argument believes suffering is bad, while the other argues that regardless of the suffering, we must always preserve life. A simple choice when it is not you in an irreversible state of pain.

Thanks Alex... I couldn't have said it better.