HAMMING IT UP! Chinese Pig Survives Earthquake - Denmark Pork Chops... not so lucky.

Life's just not fair - we know this... A pig survived 36 days following the 7.9 mag quake in China and has been returned to his original captor, to be named "Zhu Jianqiang" meaning "strong willed pig". Zhu Jianqiang was trapped in the farm shed and held on to his dear life by eating charcoal and drinking rain water. His weight dwindled down to a mere 110 pounds by the time of his rescue. Now there's an insurance policy on his life and he's even been voted an ambassador at a traveling livestock exhibit in China! The Chinese people admire his pluck and will to live.
Contrast this with the pork processing facility in Denmark which boasts it's "animal friendly" treatment of it's pigs. The operation slaughters up to 92,000 pigs weekly. 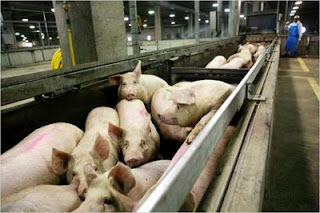 Too bad not one of these 92,000 animals has a "strong enough will to live" to figure a way out of the "CO2 group stunning machine". I mean, how hard can it be anyway? It's not like your asked to survive an earthquake or anything like that!
Guess that's why people eat the critters... Heck if they don't value their own lives enough to want to save themselves - why should we? Since they don't care enough to want to live, it's only right that they should made into yummy sausages and hams for consumers. People have a sense of fair play you know, and reward the instinct to survive...
The rest... they're all just porkchops!

Yeah... it seems ridiculous to make a big deal about one pig while hundreds of thousands are being killed. I think the one pig is just being used as a PR example for the whole industry.

All of it's pretty stupid.

Yep - whatever raises a buck - at whatever cost...
Thanks for dropping by. :)