Most will agree that causing "unnecessary" cruelty to animals is offensive and unacceptable. That needless suffering to animals goes against their value system of fairness. Although millions thrive as vegetarians and vegan - they still justify that "meat" is "necessary" - they cannot imagine surviving without their steaks, burgers, chickens & bacon... Although there is a universe full of alternatives to "leather" and "fur" - they still buy their leather couches & don coats and jackets made from the skin of other beings... They excuse the use of animals for "food" and "clothing" - seeing no "cruelty" because it is "necessity". (whatever).... But what of animals for "entertainment"? 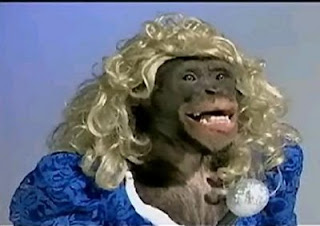 Hardly a person isn't disgusted by the existence of "crush porn" - Few condone fighting roosters or dogs... Many people know of the obvious abuses in rodeos and circuses... But what of mainstream Hollywood? Animal films made by Wildlife Kingdom and Disney? Horses used in westerns and epic films? Chimps in science fiction and comedies?
I think this video here confirms that at the very least, "entertainment" animals are not a "necessity". Nor is their use for our shear amusement "kind" or "cruelty free".
It might be time for us to evaluate what our "modern and civilized" culture is inflicting on innocent animals and how it compares to the bloodthrist of the ancient Romans. Have we really progressed? And if not - isn't it time to do so?

I am a huge film person. I watch new movies every week (though usually rented and at home). But, I am always disturbed when a movie I end up watching has an animal in it. When I saw Semi-Pro, I didn't know it had Rocky the bear who later attacked his trainer in it, or else I would not have watched it.

Maybe I need to do more research before supporting movies. It's just so hard to find out. One very cool thing is that the Dark Knight, who has scene of rottweilers being tossed by batman, used all animatronic animals. They completely fooled me until I looked it up. There is no reason why we all shouldn't be using animatronics- especially for entertainment purposes- if animals must be in the movies.

It is sad that animals are so misused. They don't have a voice to protest. :*-(

I'm a big movie fan too... I prefer the mysteries and dramas - My husband likes "action". I do know the scenes you mean in Dark Knight... they're incredible.

I couldn't watch all of Van Diesel in Babylon A.D. 2008. There were entirely too many references to "dog eating" and butchery for me...

And then the epic westerns and all those horses - one must wonder what is their fate? I don't think they "hire" indvidual horses for most of those herd scenes - I wonder are these horses destined to Mexico or Canada to face their end?

You're right - it is hard to know what you're supporting... We just do our best.