Do you see "supper" here? Apparently the Brits do:
"Part of the interest is curiosity and novelty," said Barry Shaw of Shaw Meats, who sells squirrel meat at the Wirral Farmers Market near Liverpool. "It's a great conversation starter for dinner parties."
You know, if I'm going to a party where the only thing that will spark a conversation is the carcass of a squirrel meant to be "food"... I need to update My Facebook Profile...
These gray squirrels were introduced from North America over the past century and have since become "pests"... and are crowding out the indigenous red squirrel...
Now I wonder who's profiteering and narrow minded self interests shipped gray squirrels all the way across the ocean in the first place?
Enter the "Save Our Squirrels" campaign begun in 2006 to rescue Britain's red squirrels by piquing the nation's appetite for their marauding North American cousins. With a rallying motto of "Save a red, eat a gray!" the campaign created a market for culled squirrel meat.
Oh Yummm....
If you want to grab your shotgun, make sure you have very good aim — squirrels must be shot in the head; a body shot renders them impossible to skin or eat. (You want to get rid of the head in any event, as squirrel brains have been linked to variant Creutzfeldt-Jakob disease, the human form of mad cow disease.)
Creutzfeldt-Jakob disease - now you're really whetting my appetite !
Skinning a squirrel is "difficult and unpleasant," the food writer Leslie Mackley said, adding, "You have to fight to rip the skin from the flesh." 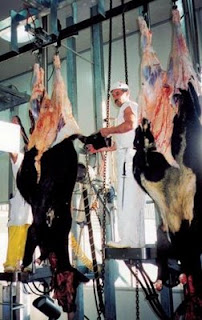 You mean like this?
Innocent animals being "culled"... hide pulling, Creutzfeldt-Jakob disease - Of course it's supper time! Or you could have a delicious Boca Burger instead, and avoid all the other nastiness. You could go Vegan!
http://www.iht.com/articles/2009/01/07/style/07squirrel.php?page=1

Oh my goodness, how many squirrels does it take to make a meal?! They're just LITTLE.
People are so ridiculous.
GO VEGAN INDEED!!

(Thanks for stopping by my blog!)

Yes... they are little. Little kind of like a chicken is.