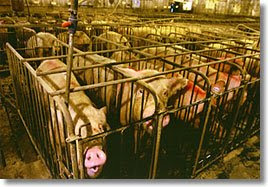 Antibiotics just are not working like the used to. Methicillin-resistant Staphylococcus aureus is a bacterium responsible for difficult-to-treat infections in humans. Infection, which can range from a hard-to-heal boil, to pneumonia to a potentially deadly bloodstream infection.

So, do we have MRSA in American grown pigs? The Food and Drug Administration says it doesn't know. And that's because neither the meat industry, the USDA, the FDA or the EPA tests for it.

I guess this is a don't ask - don't tell kind of situation.

Mike Herndon, an FDA spokesman, said their scientists have been "following the emergence of MRSA from humans and animals in Europe and Canada and are monitoring the situation very closely." And the National Pork Producers Council in Washington is sure there's no problem.... "there is nothing to worry about; MRSA (in pigs) has not been found this side of the border" and "USDA and CDC has given our pigs a clean bill of health." CDC would not verify this statement.

Interestingly, the pork lobbyists have said their industry would oppose any attempt to test all livestock for MRSA, calling the testing "unnecessary to protect public health."

Ignorance is bliss... so eat your bacon and fuggetaboutit. The Bush Administration ignored pleas from Congress and public health advocates who demand to know if highly infectious MRSA has entered the food supply.

Despite the lack of cooperation from both the government and the American Meat Institute researcher, Dr. Tara Smith conductedastudy anyway, documenting 10 swine farms in Iowa and Illinois, finding MRSA to exist in 70% of these barns.Another study focused on 20 workers at one Iowa swine farm and found 45% of the workers carried the same MRSA as the pigs. 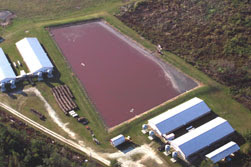 But, it's just not the pigs or the flesh that may be contaiminated, but the ground water as well. Does the EPA test for MRSA bacteria? NO. In fact, during the last days of the Bush Administration CAFO(concentrated animal feeding operations), or known better as "factory farms" was given a leinient new ruling that relieves these animal growers from reporting on discharges from manure lagoons.

And from the United Kingdom. Scientists reported that three patients in separate hospitals in Scotland were infected with the ST398 strain of MRSA, the same strain that Smith and her researchers found in Midwest farms. And it's the same strain that FDA's Herndon says is of particular concern in the veterinary medicine and food safety arenas. What makes this particularly important is that doctors reported that none of the patients worked on a farm nor had a close association with farm animals, raising the possibility that the superbug has entered the food chain in the U.K., according to an article by Martin Hickman in The Independent, a U.K. publication. So maybe your not particularly moved that billions of pigs are kept in tiny cages, inside of warehouses their entire, short, miserable lives. But you may find the risks associated with hams and chops to be too great... Be forewarned though, MRSA could also be in beef, chicken and lamb, but no one is checking. Go Vegan
http://gristmill.grist.org/story/2009/1/27/63221/5325
http://www.mayoclinic.com/health/mrsa/DS00735/DSECTION=risk-factors
cost of CAFOs to taxpayers:
http://ucsusa.wsm.ga3.org/news/press_release/cafo-costs-report-0113.html