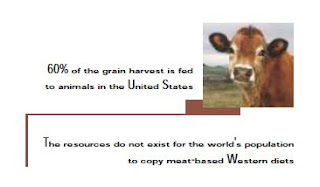 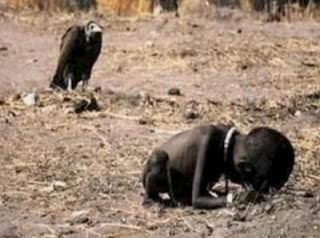 Humanitarianism
An insightful discussion on Animal Person concerning food, sustainability and survival lead me to investigate these issues further... I know the subject of world hunger and starving babies stays out of public awareness, similar to the way animal suffering escapes our view. As an aquaintance of mine once said about animal abuse: "Why think about it? - it's just too depressing". Regardless of my "sensibilities"... I press on.
I don't live in Africa, Egypt, Haiti, Yemen, Malaysia or Bangladesh, or any of the places suffering from massive hunger. But I do know a meat based diet contributes greatly to this ill:
We are feeding so much corn, grain and vegetation to animals that could be fed to people... In fact 6 to 10 times as many people could be fed on a plant based diet than a meat based diet.

21 billion livestock animals are fed grain and cereals that have could have directly been fed to people. That's a third of all grain and cereal production. 70% of the Amazon has been turned over to grazing. Animal farming uses 30% of the earth's entire land surface. FAO 2006

Those who consume meat & fish are competing directly with those who need grain for food. --Lester Brown past President, Worldwatch Institute USA

An acre of cereal can produce 5 times more protein than an acre devoted to producing meat protein. And legumes, lentils (peas & beans) - can yield 10 times as much.

Jeremy Rifkin, president of the Foundation on Economic Trends states it succinctly: “People go hungry because much of arable land is used to grow feed grain for animals rather than people.” He offers as one example the Ethiopian famine of 1984, which was fueled by the meat industry. “While people starved, Ethiopia was growing linseed cake, cottonseed cake and rapeseed meal for European livestock,” he says. “Millions of acres of land in the developing world are used for this purpose. Tragically, 80 percent of the world’s hungry children live in countries with food surpluses which are fed to animals for consumption by the affluent.” It would take just 40 million tons of food to eliminate the most extreme cases of world hunger. Yet a staggering 760 million tons of grain will be used to feed farmed animals this year.

Around 1.4 billion people could be fed with the grain and soybeans fed to U.S. cattle alone.

And about water resources: 1.2 billion people have access to less water per day than what most American's use to flush their toilets (once). It takes 6 times more water to raise a pound of animal protein than plant based protein:

Adopting a vegetable based diet utilizes all resources to the efficiency of feeding 20 times more people than on a meat based diet...

In truth, I don't know how to build or fly an airplane - But I'll be darned if I board one that has a missing wing. Animal agriculture has a missing wing. It doesn't fit with expanding population. We cannot continue to consume "high on the food chain" if we expect any relief to world hunger or wars fought over resources. The food is there - it's just a matter of distribution. 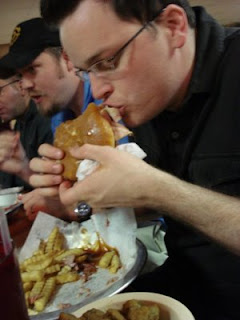 So omnivores, while you're gorging on your double whatever... telling me I'm not doing enough for "starving children", "world hunger" or "humanitarian issues". I suggest you suck it up real hard and eat a freaking tomato! sources: World Food in Equality Food for Global Life Common Dreams Well Fed World

Bea, this was absolutely eye opening! Wow! So why isn't everyone doing this?

So - why isn't everyone doing this? You mean - going Vegan? Gosh... I've heard a hundred reasons why they can't (or won't). But, just considering land/water resources - it seems like the only sustainable diet for the planet.
Thanks for dropping by :)

Well this is why we need to send these people high protein meat so they won't starve. I know lots of places that donate meat around the world. Some even ship them animals so they can feed the people. Vegetarians are causing world hunger not people who are feeding the USA and the world. You're wrong - meat is good for you and you won't change that either.

Seriously, the last thing people (who are suffering extreme starvation) is meat. The first thing they would need is to hydrated - because I'm sure they are probably also without liquids in their bodies.

Having survived hurricanes, I know what it's like to go without water/electricity for weeks on end. Believe it - the last thing any of us wanted was "meat" - we had a hard enough time either trying to prevent spoilage or disposing of the freezer full that did become rotten.

If one is truly concerned with starving people - they can reduce/eliminate the consumption of meat from their diets... thereby freeing other resources to feed "starving" people.

It's just that simple - Go Vegan.