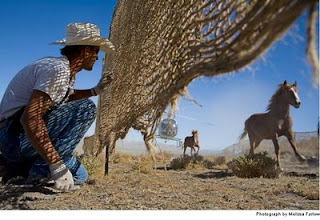 The February issue of National Geographic Magazine has an article, about the government's round up of Mustangs on behalf of cattle ranchers, headed, "Spirit of the Shrinking West: Mustangs." It includes gorgeous photos of the animals, and disturbing photos of them being chased by low flying helicopters across the plains towards pens.

"Wild horses are right in the middle of a culture that wants nothing to do with them. The wild horse has been despised ever since white men came west-blamed for everything that can and does go wrong on these grasslands. So in the mid-1800s, when stockmen released up to 40 million cattle on the plains, where horses had lived for centuries without destroying the grazing, at most two million mustangs were held responsible for the suddenly depleted range." J Kirkpatrick, director of science and conservation biology at ZooMontana

The article explains, "Traditionally ranchers haven't had much time for anything that competes with them for resources. It's not uncommon to find coyote carcasses draped over barbed-wire fences, as if Westerners had gone trolling for whatever offended their souls and, unable to shoot the wind, turned their ire on something more tangible." The article's author, Alexandra Fuller says "The Bureau of Land Management, is required to manage 258 million acres as "multiple use." In theory there should be enough room for everything, but in reality, from the moment pioneers settled here, resources have been extracted with little patience for anything that got in the way of a silver dollar. "The BLM decides what are appropriate management levels for horses. Advocates believe the numbers are fixed arbitrarily low, threatening the genetic viability of the herds; ranchers say they're unrealistically high, threatening vital grazing." The article includes distressing descriptions, as well as the photos, of helicopter chases during mustang round-ups. Chris Heyde of the Animal Welfare Institute says, "Every year they pull more and more horses off the range to keep the ranchers happy. Meantime the scenario for the horses is just awful." Though it is not supposed to happen, we are reminded that most of the mustangs, the symbol of the Great American West, end up in slaughterhouses in Canada and Mexico. Killed for their flesh and their leather hides. There are contraceptive alternatives for these horses, however the BLM is resistant. Spending too little studying fertility control and too much on helicopter roundups. But when approached about using such wildlife contraceptives the response from the BLM was, "This is not how we do it out here. We do it with horses and ropes. And helicopters."

And it's true... it does seem like everything gets in the way of the space the cattlemen need... Or rather... the grass to feed the cows. The wolves, coyote, mountain lions, bison, elk, prarie dogs. Even birds are a threat to cattle interests once the bovines reach the feedlots. And anything that gets in the way of cattle interests are hunted, herded, trapped, poisoned and killed. Perhaps if we are running out of sufficient room to grow the cows - we might consider adopting a different, more sustainable plant based diet? This is the way to evolve while continuing to co-exist with other inhabitants on this earth. Unless all we want to have left on it is a bunch of McDonalds & Burger Kings? 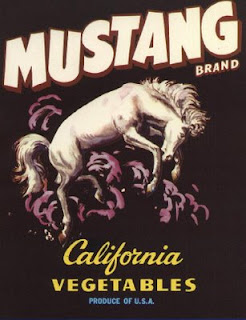 As for me, I'd much rather eat my veggies and respectfully let the wildlife be. Go Vegan

"This is not how we do it out here. We do it with horses and ropes. And helicopters."

The parallels between this sentiment and Southern Americans during the Civil Rights movement are palatable.

It's a gleeful spurning of the evolution of Ethics premised on the notion that if an idea doesn't resonate within the context of current understandings then it is necessarily invalid, which make's any conversation about morality self-defeating. They will change, then, only when forced.

"They will change, then, only when forced."

Very good point Alex - With actions like these... I'm quite anxious for that time to be near.

Hi, I am a new fan of your blog. Hope you can join my free horse lovers club RiderMate.com. It is very active now.