A Vegan's Voice on Animal Agriculture

There's a piece written in the Agriculture's Voice that delights to tell of favorite "things". Of course these "things" all are dead bodies & parts, made from tortured, murdered, INNOCENT, SENTIENT "BEINGS". 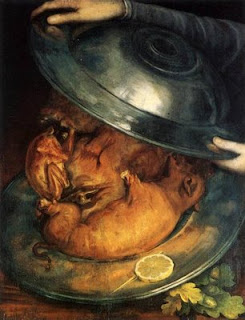 The article goes on: "there are people who have different tastes." The well chosen word here is "taste", which is an effort to exclude any ethical consideration or debate. It is an attempt to minimize the "choice" not unlike the preference of a blue car over a red one.... or boxers instead of briefs. It continues that vegans have "good intentions" in their lifestyle choices. I agree that an ethic which attempts to avoid as much "unnecessary" harm as possible, is a good thing. Avoiding violence - is a good thing. And Ag's Voice says that they would "never shove meat, eggs or dairy down someone’s throat..." But certainly the meat industries are shoved down ones culture. It is a culture propped by the myth that one "needs" animals to live. Veganism exposes this myth. The article continues: "most farm animals are treated very well." Until they are needlessly killed that is... Even so, let's examine the "kind" treatment to farmed animals:

Animal ag defends that these practices are "in state-of-the-art, climate-controlled facilities"...

True, the dairy cow who has never seen grass, is probably housed in air conditioning. The pig who cannot turn his body is likely to be misted a few times hourly. And the caged chicken lays her miserable eggs on a fast moving conveyor system.

It is all so "civilized" indeed. Animal ag says this is "necessary to protect animals"... "from predators".... Fess up animal ag - it's about profits and units. And your animal killing, meat-eating culture is the animal's worst "predator".

As suggested in this article - I intend to tell all my friends and neighbors and anyone else who will listen about all the things that are done to "food" animals. I am going to send them to see videos. I am going to be a strong advocate for the Movement "afoot" which tells consumers they have other compassionate and healthier choices. I'm going to invite them to question the ethics and "need" of such cruel "choices" to continue. Animal ag is right about one thing: we are not going away. We are going Vegan.

thanks for your comment at tipping point re pork recipes.. no I don't have pork recipes!!! I was trying an experiment using that tag to see if I could draw some pig eaters to my post but I think I had best delete the tag

Oh gosh... that explains it - I was confused because your blog indicated that you loved animals. And I know now that we both agree "eating them is a big no-no".

Thanks for setting me straight - sorry if I made your experiment backfire. :)

lol no it was a good test! Thank you for commenting and sorry to put these out-of-context comments on your blog post :). Great to know about your blog Bea. I will check it out more and yes we are on the same page that eating them is a no-no!

Colleen - not out of context at all - we are allies :)

I've listed you in my "found treasures" - I'll be checking in on you too. Stay the good fight.