Animal Agriculture: IS NOT ABOUT DEATH - IT'S ABOUT KILLING

Frequently those who condone consuming animal flesh do so under the guise of "the natural order of life". Animal agriculture defends it's position that animals raised as food, are part of the "circle of life". I've personally been criticised as one who is unwilling or uncomfortable to face "the 'cruel' hard facts of death". Here is my reply:
It's not about "death", it's about killing: 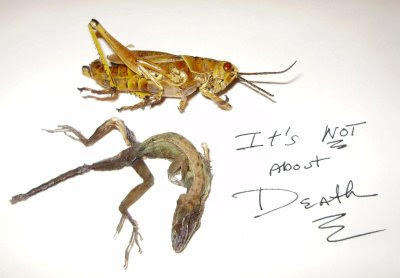 These are two expired life forms were found in my yard. The insect is an adult lubber grasshopper. He went from this almost microscopic nymph stage: 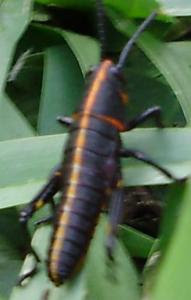 to maturity in about a year. Because his body was found intact... There's no indication of any injury from a predator, I can only assume that his death occurred at it's rightful time. The grasshopper "lived his life cycle".
Likewise so did the American Anole: 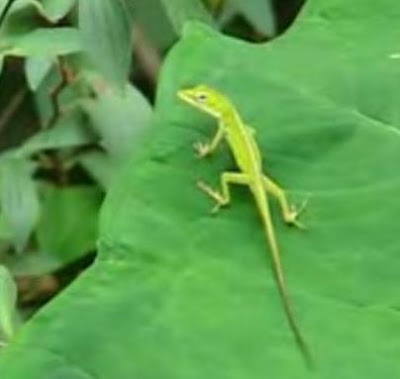 The Anole, or as many call them: chameleons are a common backyard lizard in the south east. Here in Florida, spring hatching's bring tens of thousands of tiny beings into existence. At the beginning of their lives, several can fit on one dime... It's amazing how instinctively they know how to hunt their insect prey which will sustain them for about 5 years. After such time, they will have grown to complete adulthood and will, (like the guy in the first photo), meet his natural end.
Both dead beings now in early stages of decay, have lived total lives. Neither had their existence cut short or compromised by a predator. From here on their remains go to the earth and to other beings who "disassemble" and consume dead flesh...(scavengers).

When animal agriculture wants to tout their contribution to the "natural cycle" I'm vexed to accept this term. The animals they raise do not live a fraction of their life expectancy.

Chickens can live 8 years - yet, after only 43 days, they will be butchered. And the worthless male babies in egg operations, are machine macerated or suffocated within 24 hours... Does this sound (or look) like the "natural life cycle" to anyone? 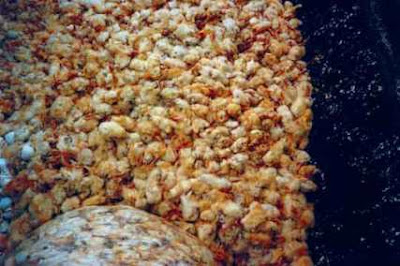 A pig's life expectancy is about 10 years... and some have lived to 15. However, once they reach "market weight" (and are not profitable to feed any longer) they are killed at about 6 months into their "natural lives".

Bovines as well have long life spans... On record, the oldest is 28 years. But on average a cow can live a healthy, happy 15 years. That is unless she is part of the "natural circle of life" as defined by the meat industry. Because of the dreaded prion BSE, all cattle are killed before 30 months of age. Most are *culled* at 11 months old, shortly after reaching adolescence. 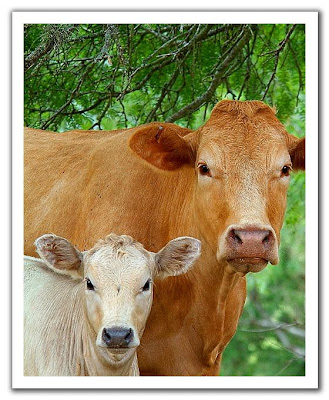 Next to the egg industry, the dairy business shares the monopoly on infanticide.
Calves are stolen... err I mean "removed" uhhh - I mean kidnapped permanently, from their mothers (in honor of the circle of milk, err... I mean "life") within a day or two... Depending on sex, the young females might be allowed to live, till her calcium depleted body is sent to slaughter at age 4...
Or if the baby is a male he is either sent directly to slaughter at just a few hours or days old... or at 4 months young... err, I mean "old" as intended for the "veal" industry. 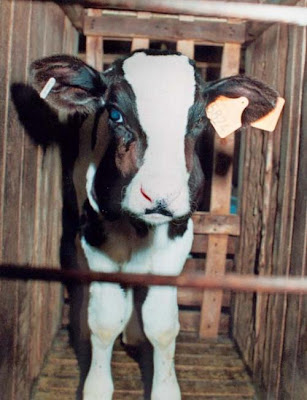 Now, I've bent some words and concepts in my life - I've outright lied on more occasions than I'm proud to recall. But this relentless, deliberate manipulation of truth by animal agriculture has got to be exposed as what it is! Absolute malarkey!

No animal used for it's flesh ever gets to live out more than a fraction of their "natural" life. Nor do any meet their "natural" end. They do not die, as in the example of the lubber grasshopper, or the lizard.

Animals used for food are killed, literally as infants and juveniles. There is no "circle". And certainly no "natural" end. Animal agriculture and meat eating is just a swift, untimely dead end for these animals. No matter how fluffed or sanitized the animal "husbandry" folks want to proclaim their *science* to be, the plain truth is that they are the interrupters of the "cycle of life" and they are the antithesis of the "circle".
So it's not about death... It's about killing.
Choose life... choose compassion - Go Vegan

Did you ever think killing was natural to man? We are predators you know.

Being a natural predator seems a little different to locking a baby pig/cow/chicken in a shed, keeping it confined in a small space away from its natural surroundings, feeding it till it's big and fat, before slaughtering it and slicing its body into little pieces to be neatly shrink wrapped and displayed in the meat isle of your local supermarket. That doesn't seem very natural to me...

Gee... I can't add anything more to Klem's brilliant assessment.

Thanks good friend, for rescuing me out of this one :)

I think that what makes us different from true predators is that we can make choices. It's supposedly what makes us "superior" to the other species. We can overcome our baser instincts.

To simply say we are predators is to wash one's hands of all responsibility for the choices we make. We don't HAVE to kill something and eat it. We CHOOSE to do so. There's a big difference.

Ana - you're right... we can (and should) overcome our baser instincts. And killing (eating) animals is always a choice.

Unfortunately, we're also capable of some very clever rationalizations, which enable us to avoid making (good)choices.

So it's true, the "predator" in us wins only by default of our own moral cowardice... And if this is so, how "superior" are we after all?

Good point. Thanks for bringing this to light! :)

'Calves are stolen... err I mean "removed" from their mothers'

I think you could say "kidnapped." Permanently.