April showers bring spring cleaning... at least that's the way I know it. This time of year we open windows... and dust winter's dreariness from our homes. I have a top to bottom method, which makes sense to me: first ceiling fans, cobwebs, sills (everything in between) and finally floors. This process works itself to a point of manageable containment. Eventually I'm left with finishing the job, or hiding things under the rug. 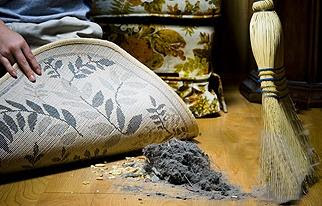 Now, if I were to hide the offending matter I would do so from laziness. And in this way, cleaning is much like thinking; it's a deliberate act. The decisions are ours, and making a thorough effort is it's own reward. But there are those who would do otherwise, believing the task too difficult. Both bad housekeepers and atrophied thinking have similar reasons for shortcuts: it's easy. While sweeping debris under a carpet is harmless. The same can't be said of refusing to think things through when it comes to the hurt of living beings. I'm referring to the way in which we cause unnecessary injury and death to animals by eating them. Because of cultural indoctrination, most people never question the practice. Through no fault of theirs, a person who eats animals may not ever have thought about why they do such, or been given reason to change. But once presented with an idea of a better way, they are required to think things through regarding the merits of a vegan diet. Lest they be a slovenly housekeeper regarding their better judgments.

I didn't know that pets actually ate the dust undernear rugs. I've complained to my customers for years about simple putting the dust into the garbage. It pollutes the air and is just disgusting.