A collapsing dairy industry has over 100,000 female cows going to slaughter earlier than scheduled. They are being sold at bargain basement prices... According to the L.A. Times: "Slumping international demand combined with an American public ordering fewer cheese pizzas has turned the milk market sour." "Some farmers say fast action is needed. They're dumping their milk on the ground to draw attention to the crisis. Many are burning through their life savings hoping to survive the slump, and others are exiting the business. Two have committed suicide." I know this is tragic... But isn't this the voice and will of international demand and the cheese pizza buying public? Haven't we all heard that the dairy industry is valid because of Happy Cows, and "consumer choice"? "A 42-year-old dairy farmer outside Filer, Idaho, planned to participate in another milk dump on May 31. But he fears he may not be in business that long. For five months, he hasn't made payments on the roughly $800,000 he borrows annually to buy feed for his herd of 1,000 cattle. He said his bank is forcing him to sell his herd to pay his debt." Ouch! $800,000... But we've bailed out cars... I'm quite certain we will bail out cows as well.

The USDA hoping to buoy wholesale prices, recently bought 200 million pounds of excess powdered milk to filter through the school lunch program. And has implemented a new program that will pay farmers to slaughter their entire herds. 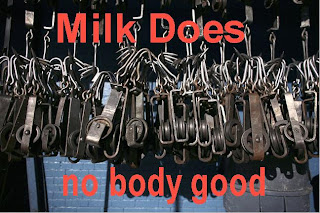 Adding to a depressed market, I have no doubt that it does not help the dairy industry that a majority of the U.S. population is lactose intolerant, and that milk is responsible for many other health issues, it's also a threat to the environment, and is brutal to the animals.
There are far too many healthy alternatives to allow them to continue to "milk" the American taxpayers.
Get the Facts on Milk

This is a great post, Bea! Milk has never done my body, nor my daughter's body any good. If we consume any form of milk product our bodies fight us horribly with extreme digestive distress. My daughter was tested years ago and is allergic to Casin (the protein in diary) which is found in many different things including meats. We have found it so easy to live without dairy, there are some wonderful alternatives and we've even got my all-American husband switched over, too! Save the cows!

Right you are about the digestive issues... I always wondered why I got cramps after cereal... It just never connected till I switched. Now, my bones feel better than ever and my nails grow like crazy -Go figure(?)...

I too am grateful for alternatives... My favorite is almond milk... then rice - soy, not so much.

Just as an experiment, I'm going to try this oatmeal milk recipe:
http://www.fatfree.com/recipes/drinks/oatmeal-milk
Sounds like it might even freeze well for a summer time treat... :)