Last year on November 15th, I had the good fortune to stumble on Klem's 365 blog. He's a remarkable photographer... and does many clever things behind and in front of his camera. But this day, his posting was about something entirely different, but still a matter of importance to him... He spoke of cruelties surrounding today's "modern" animal systems...
It was an earnest post... followed by an equally sincere one the next day - about caged hens. After this was a week of photos of him preparing and enjoying veggie meals. He only intended this vegetarian experiment to last 7 days... But today he marks his official 6 month celebration!
During these months I've enjoyed keeping up with his antics, his juggling, his travels, his work, and his work with student photographers... I've been privileged to share through his blog, his accomplishments large and lesser; some somber moods and some zany pranks. Always with a positive attitude and a zest for adventure. Yet, Klem is also a deep thinker and seeks a fairness that others turn a blind eye to.
It takes courage to publicly announce your opinions on unpleasant, but widely accepted practices. Klem did such. And on occasion he faced ridicule... probably many more times than what could be read on his blog. Nonetheless, he has risen above petty insecurities others are too small to face. He is a hero to me because he stands on his own judgments - and because his judgements are rational... and compassionate. 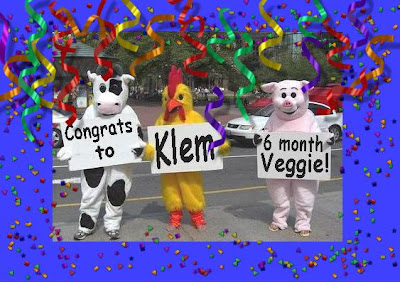 Happy 6 healthy months Klem! It is an honor to know you - and call you friend.

Email ThisBlogThis!Share to TwitterShare to FacebookShare to Pinterest
Labels: friends -

I am lost for words (for a change) thank you so much for this. I will post a quick write up on my blog in a second about this day and my six month journey.

Thanks for all your inspiration and information over the past months. You are truely the most amazing person I've never met! Hehe! :) I owe you my good health!

Klem... this is wonderful that you are pleased :) But you know... you came to your conclusions on your own... I was just there, able to reflect back what you saw anyway. And I'm no doctor... but you are definately looking quite fit these days - fattening veggie food and all - LOL.

Congratulations, Klem!!! I applaud your life change and wish you continued success on being Vegan!

Bea is a fantastic woman and not only a wealth of information, but a wise, wonderful, supportive friend!

good morning everyone. I'm actually into shoes and I was searching for the sake of that particular brand. The prices due to the fact that the sneakers were all over 320 bucks on every site. But finally I base this location selling them someone is concerned half price. I absolutely want these [url=http://www.shoesempire.com]prada sneakers[/url]. I will definetly purchase them. what can you tell me about these?

hello ppl. I'm actually into shoes and I had been searching as far as something that singular model. The prices as regards the sneakers were all over 320 bucks on every site. But finally I base this location selling them for the benefit of half price. I really want these [url=http://www.shoesempire.com]prada sneakers[/url]. I will absolutely buy them. what do you think?

Hi... These shoes do look to be vegan to me... Gosh though - $320 -Wow! You could shop around for shoes a fraction of the price --- And just donate the rest to an animal sanctuary or Animal Rights organization... Just a thought...