So here's a challenge for all who read... I bet just about anything you cannot name one single animal that has not been exploited by humans. Nope, not one...

"In the last 500 years, human activity has forced 816 species to extinction or extinction in the wild. One hundred and three extinctions have occurred since 1800, indicating an extinction rate 50 times greater than the natural rate. Many species are lost before they are discovered. 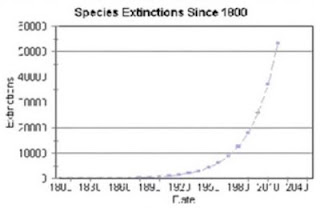 The primary reason: humans. Everything from expanding cities to deforestation, agriculture and fishing pose a significant threat to the planet's biodiversity. In the last 500 years, some 816 species have disappeared - some permanently, while others exist only in artificial settings, such as zoos.

The most serious threat is the clearing of forest areas for crops and cattle, and logging by lumber companies. There is also poaching animals for fur, bones and other parts of their bodies as well as thieves who steal the animals from their natural habitat to sell as "exotic pets" or as "entertainment" exhibits.

While their suffering cannot be calculated or charted - it only stands to reason that their journey to captivity or extinction has been burdened with tremendous fear and pain. Of course a vegan diet alleviates some of this... so does a reduction in consumerism, and mindfulness of where your money goes.

Live simply so that others may simply live.

I begin on internet with a directory