Stephanie Ernst at Animal Rights - Change.org posted this story on her blog: The Center for Consumer Freedom and its unscrupulous mouthpiece are fond of pretending that they do care about at least basic animal welfare but that they're just "normal" about it, as opposed to those of us who are extreme--that is, those of us who really care about eliminating unnecessary suffering rather than just occasionally pretending to care for sake of PR. Well, here's one of those great examples of how much they care:

What's he referring to? What's so funny that it calls for his trademark flippancy and sarcasm? Thousands of chickens were burned alive in Washington State late last night and early this morning. Clearly hilarious. Fellow animals able to feel terror and pain every bit as much as you and I were trapped inside enormous sheds, while smoke joined the usual burning ammonia in their lungs, while they panicked, while they screamed out and flapped their wings as much as their cramped quarters and burdened bodies would allow, while they burned alive, trapped and with no hope of escape. And a propaganda artist who likes to set himself and his clients up as the level-headed ones, as the ones who represent the majority of Americans and consumers, thinks it's funny. He's just disappointed that they burned to a crisp inside a shed rather than on his grill. The panic, the horror, the terror, the pain--it's all irrelevant. Screw you, Martosko. Screw you.

Thank you Stephanie for exposing this man's callousness.

I might further add that this is a horrible story for sure... of course for the chickens - I can't imagine a more awful death. But then, it happens very frequently in the animal killing business... these infernos that torture imprisoned animals to their last breath. Google "hog farm fire" and you'll see what I mean. But seeing that they loose over a million pigs a year in transport alone - it's no big deal for them. However, they always think it's a "tragic" loss in the financial sense and it's always the money they grieve most. And of course, it's no coincidence that these "accidents" happen when grain prices go up... or when the industry might be facing a downward trend. Better to let the insurance companies pay for the loss. A nice crisp fire in a hog barn or chicken house... who really can trace the origin?

I've blogged before about animal agriculture and fires... It is a common occurrence - imagine a culture that accepts the routine burning alive of imprisoned animals - and then jokes about it? If you are eating meat... and supporting this industry you hold just as much responsibility for such acts as if you had lit the match yourself. 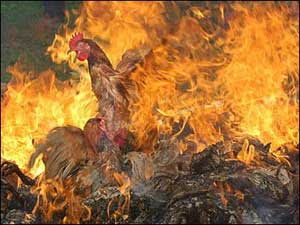 Anyone with half a conscious can see that this is barbaric treatment of sentient beings... This totally unnecessary, vile, evil is in your power to condemn. Do so. Go vegan.

There are times that I honestly understand the rage of those in the Animal Liberation Front. People like Martosko deserve the very fate that they laugh at.

I am so sorry to say that, but it's how I feel. (Will the FBI start following me now that I've written this? :-)

Where in the world did you get that picture of burning chickens? Chilling.

Hi Ana... I think the FBI is in such a sorry state that simply if you question the treatment of animals... it may make you "suspect".

And I agree this guy Martosko is truly a monster... even those without sympathy to animal rights would agree this is a tragic story - not a humorous one as he attempted to make it sound.

And the photo? It came from somewhere on the web... from someone who was witness to their plight - as we all are, to the extent that we allow ourselves to be.

Thanks for your voice that does not stay silent...

OMG, what a horrific story! I do not understand how anyone could take light of any living creature dying such a horrible death. Kharma...I wouldn't wanna be that Martosko guy!

Serenity... you're right - it's a horrible story. No being should have to burn alive - Probably not even those who would joke about such a thing...

Oh, Bea, I drove past this site yesterday, after spending a lovely hour at Pigs Peace Sanctuary. It was a prime lesson for the 4 kids in my car, 2 of whom are vegan. Seeing the charred remains of the buildings spoke to all the kids (I may have added a little bit of graphic detail...).

Oh my... what a way to end your visit to PPS. But too, what a great way to illustrate to kids what really goes on in animal agriculture. Surely the devil is in the "graphic" details... poor, poor birds. :(

Thanks so much for dropping by - and for all the kindness you bring about!