SHORT 'n SWEET - I DON'T WANT TO BE A VEGETARIAN!

For what this billboard failed to say I say now: 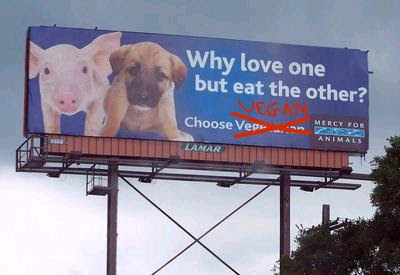 Thanks Bea for posting this, it makes me smile to see that there are people out there with common sense. This is fantastic work by the graffiti artist The logical word for the sign to use was vegan! We need to make veganism the default word, and stop stigmatizing it. Thank goodness for the person who changed the sign. Now it has a REAl animal rights message.

But don't you guys know? VEGAN is too "extreme" people are afraid of vegans. LOL.

I hate that they use the word vegetarian... vegan is the right word to use.

I don't have a problem with the word vegetarian. I think in the majority of the USA, people are intimidated by the term "vegan" and vegetarian is safer. I'm all about baby steps and if I can convince someone to cut meat out of their diet one day a week that's something. At least it's a start! :) I don't think it has to be "all or nothing" in the vegetarian/vegan vs. omnivore debate.

Holy crap, is that the original billboard with an artistic twist, something you photoshopped in, or a graffiti artist's take? Either way it's awesomesauce.

Philosophia ... and Elizabeth - I am fessing up! Twas I that did the deed! But how could I resist? It so needed doing!

Thanks Paola - You're visit reminds me to go see one of your youtube videos!
http://tinyurl.com/mdqbdu
Congrats on such a lovely wedding!:)

And you're right - people should not be afraid to use the word "vegan". It is not extreme it is consistent.

And CulinaryAssasin - The problem I have with using "vegetarian" is that it is not - consistent with avoiding as much harm as possible.

When I was a vegetarian I thought I was ethical... And unless I had heard the full truth about dairy, eggs and leather - through vocal advocates -I would never have known the shortcomings of my lifestyle. Telling people "vegetarian" - as this billboard attempts to just misses the mark.

It's a kind of deceit - If your real message is to eliminate all uses of animals. To really promote Animal Rights and abolitionism... then the only message can be "go vegan".

Vegetarianism is a great step IF you aren't aware. BUT it's a lousy excuse to continue if you are.

There are two reasons not to eat a dog but to eat a pig:

1. Culture. Dogs are eaten in certain cultures, but the US culture isn't one of them.

2. Relationship. Would you eat something you knew and was attached to?

Actually, there is ONE reason not to eat either - They are sentient.

2. I'm "attached" to all living beings - and wish to cause harm and suffering to none. Your view is based on exclusion - mine on inclusion... I'm not higher or better than any, nor are any higher or better than me... If we all respected the rights of others to exist for their own sake the world would be a much better place. :)

I like it--reminds me of the movie Babe. I've wondered if that movie inspired anyone to become a vegetarian. I know it caused some people to see pork a little differently, at least in the short term.

Well thanks Snowbrush - It beats climbing a ladder with a red paint brush! :)

I think a lot of people see pigs, cows, chicken, cats, dogs, dolphins, wolves, etc... differently, once they view the world through their eyes.

I think this empathy and respect is a good thing to nurture... What about you?
Peace,
Bea