Some people treat everything and everyone like "trash"... I've been slow posting anything - being involved in helping a friend (of a friend) with a garage sale. This individual has found himself suddenly homeless. Well, I didn't mind (much) the greasy (animal fat covered) kitchenware that came from his home... I managed to overlook "bad housekeeping" and ignorant food choices. But then a load of boxes arrived at my home --- one of them with this: 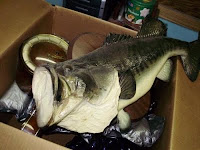 A filthy, dust covered mounted dead fish. A precious, autonomous being who at one time lived freely in his own environment... His home being the pristine, fluid contours of the sea.
But one day... friend of a friend - set about with his sharpened knives, gaffs and steel hooks to "catch" his inferior prey. Friend of a friend spent good time and money in the hunt for this sea creature. Friend of a friend felt the power of his boat that lead him to his favorite "fishing spot". Friend of a friend has charts and gages and instruments to lead him to his victims. Friend of a friend cast his line securely affixed to his reel and rod... an extension of his masterly persona. Friend of a friend went through many Others before... some were "keepers" and tossed into the frigid iced cooler and they flapped and croaked while they gasped for their last breath... Others were "shit fish" - good enough to carve alive as bait for the next creature to "nibble" on. And part of the "game" - friend of a friend enjoys one thing from the capture of these innocent beings: "The Fight". A good day fishing is one that includes lots of experiences with fishes that struggle hard - those who in particular, have size or a strong will to live. This helps friend of a friend believe it is a "sport". Friend of a friend considers this a "contest"... Of course 99% of the "rules" are made by him - Nonetheless, he finally achieves his Victory! He "lands the big one"! So joyful is he that photos are taken... and bragging rites are claimed with weights and lengths of the subdued beast. A tale will be told many times over of how the creature almost got away... And so special is this story... that friend of a friend chose to immortalize his moment of conquest with the mounted trophy shown in the photo... A stuffed carcass -covered with dust - for sale as "trash" at a yard sale, at a friend of a friends borrowed home... I'm so glad that friend of a friend doesn't read my blog... I tried to be kind to him - even as he told a story about throwing living fishes at fellow fish-hunters on the boat... They all laughed with amusement at the cheapness they could reduce life to. Guess some guys just need it for the "lift" if you know what I mean... So friend of a friend... I can only close with one thought. You have more in common with the person who threw the dog in the trash and with blood lust of Michael Vick than you would ever care to acknowledge. Fortunately from this yardsale, I salvaged a great opportunity for advocacy ~ you can't keep a good vegan down... that's for sure!

I call friend of a friend - associates. It's like they are not friends but are forced to associate.

Yes, fishing and hunting and corpse-munching have much in common with dogfighting

"Associates"... yeah, but that's so formal - I was "forced" to commiserate with this guy - suddenly becoming homeless must really suck. Still, there was a part of me that was pleased with Karma - He made many, many fish homeless --- so now how does it feel sucka!!!