A new group of unweaned human adults wants to drink the milk of yet another species... The camel. 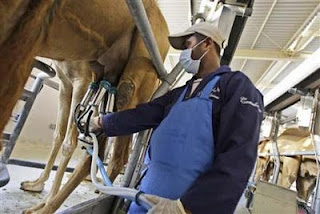 Touting claims similar to, and some beyond pushers of "cow's milk" - There seems to be some interest here in the U.S.  There are more than a dozen camel dairies.  And the milk was USDA approved for human consumption in 2009.

I have just two concerns regarding camels milk:
One is that IF "nutrition" is part of the scheme of consumption... Shouldn't humans be drinking hyena milk?  It has 15 times more "protein" than cow's milk... And about 10 times more than camel's milk.  No, probably not... hyenas aren't as docile as camels and cows - They just wouldn't be as easy to exploit...

And that leads me to my second question... Knowing all I that I do about what happens to baby calves in cow dairies... It makes me wonder - What happens to the male camel calves?  The baby "Joe" camels?  Certainly they must be stolen from their mothers - In order for the humans to steal the milk as they do from cow calves.  I'm curious - will they have baby camel igloos and hutches to make a killing from those infant's bodies too?

Ah! But think of the new markets it will open!  Manufacturers of bigger prisons housing and feeding equipment.  And hey!  What about all those slaughterhouses that will have to be redesigned to accommodate for their "humane" slaughter as well!  Quick!  Someone call Ms. Grandin... She's got more animals to design "stairways to heaven" for... Or would these be stairways to Alla?

Oh Bea! I love how you describe these people as a "A new group of unweaned human adults..." Indeed! I got a laugh out of that one...
but that photo just broke my heart. :-( Look at all those babies kept in prisons as far as the eye can see...
HORRIFYING. How could anyone justify doing this to sentient babies all for the sake of a few licks of ice cream?

I agree with you So I'm Thinking Of Going Vegan! vegan elder sure coined an accurate picture of "modern" man. "compassion atrophy" - Exactly!

Hi Jo... The truth is said in jest and although I joked about the "Jo" my heart breaks too for I know their fate if any money is to be made from their mother's milk.

And the places with the igloo huts? Some of them house 30,000 calves - Shockingly insane isn't it?