Disposing of the Carcass... Turkeys, Pigeons, Deer and other Sacrificed Bodies

I have a bone to pick about the way that carcasses are disposed of... 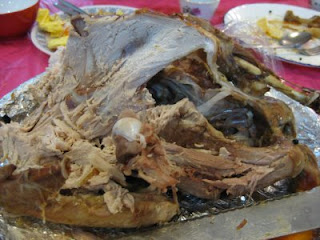 One of the biggest is the absolute waste of it all... The "meat" I mean... Or at least that was my only concern when years ago I watched the cook and hostess of the meal I had just eaten, take the "left-overs" (consisting of 1 "drum-stick", both "wings", 1 neck and a considerable amount of "flesh") and dump the entire into a "waste" can.  In my thrifty mind... I remember using every possible bit - even to the "marrow" in a soup... Guess I had a hunch as to the true value of the (stolen) life ~ Even then and before that...

Still --- these do appear to be fatter years in the land of plenty - And abundance is reflected in our frivolous excesses... I mean how much "work" should one have to do to utilize a "free" turkey?  Or, at a mere .39 cents/pound -Why worry with the economics of a bag of bones?

And speaking of a skeletons and disposing of dead bodies... I was at a neighborhood park recently with my dog... A car drove up close to us (and the trashcan nearby).  He warned me... "Don't let your dog near that - It's rotten chicken!".  Huh? I said to myself... Gosh I wouldn't let anyone I cared for, near dead "chicken" --- "rotten" or not!  The guy drove off thinking nothing of the foul, disgusting and hazardous "thing" he just deposited in MY neighborhood!  "Typical meat-peep" I mutter to myself.

I also remember driving around hillbilly town once... I was at a light behind a couple who were feasting on a "value" box of "chick'n".  Chomp, chomp, chomp... Out the window on each side, went the flying bird bones! Absolutely gross...

And I can't leave this post about carcasses, bones and wasted life without the mention of the pigeon pile discovered through a SHARK investigation... 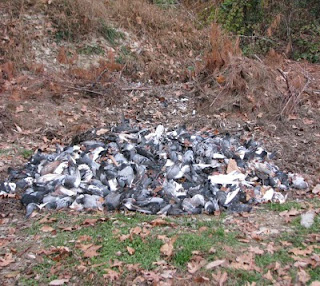 Or the illegally dumped poultry and pig carcasses on factory farms... 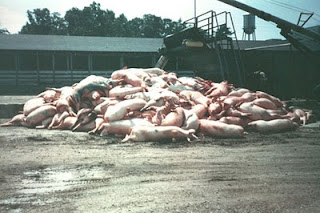 Or just the friendly run-of-the-mill "litter-bug"...

Or the "spoils" of the "victors" during their war on the innocent:


Or the leavings of the angler who took "souvenirs" from the sea: 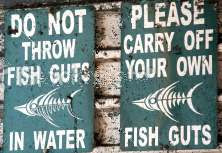 Face it... wouldn't it be a kinder and healthier decision to just leave the critters alone... Stop breeding them - Stop killing them - Stop eating them - And stop creating problems of what to do with "their" waste.
Be Vegan.

What heartbreaking photos. ... And that "pigeon shoot"...I am almost speechless. Almost speechless about all of it. It looks like the photos from Auschwitz, etc. The fact that there are those still alive, although barely, and suffering like that is something else I can't really wrap my mind around. It is never going to make sense to me how it is that most humans don't have any connection to our fellow creatures. And worse, treat them as garbage. Living in Berlin, I have seen birds treated horribly and I just don't 'get it'. Humans use the excuse that they are dirty, but here I see men urinate and sometimes defecate on the street on a daily basis. I have a video of myself feeding pigeons and sparrows and they are sitting on my hand and you can see brief glimpses of the humans around and they look like they are going to die of disgust. Because of a bird? They are disgusted by beautiful, loving creatures, but think nothing of the guy peeing on the curb 10 feet from them? That makes sense. ... Isn't it 'funny' that there are man-made laws about abusing a corpse when it comes to human remains? But feel free to abuse the corpses of all other creatures. Why not, they're "just animals". Outrageous.

The photos give lie to the notion of humans as the "superior" animal. If we are the pinnacle of "intelligent design" then the designer needs to go back to school.

vegeanelder - I appreciate your little joke - Despite how sad the truth really is.

Krissa the video of you with the sparrows sounds beautiful. Don't let it be tarnished by what the others observing think of it all. It is said that man abuses birds most often because of the sheer envy of their ability to fly... Having wings - They are like angels and closest to "gOd". I don't know about that, but what must the first person to cage a bird have been thinking??? I suppose for him it was the ultimate power to control an Other who would otherwise be free from earthly confines. Makes it all the more tragic...

And yes, you are right - We sanctify human corpses. Even though we claim the most valuable part of human life is the invisible, intangible soul. Yet in the meantime, we defile life that is truly innocent for their lack of possessing a soul. But what can you expect? We're "just human".

Sigh. The truth can be so sad. Good thing there are people like you and I spreading the word. Love you thought provoking blog. :)

Your comment reminded me of one of my favorite quotes:

“Auschwitz begins wherever someone looks at a slaughterhouse and thinks: they’re only animals.”
~Theodor W. Adorno

And yes, humans are the nastiest of all creatures yet their carcasses are sacred, worthy of eternal preservation. We shoot 'em
full of the most toxic chemicals we can find & paint 'em up perty to rest in a lead box to foul the earth for eternity.

It is the height of egotheism.

Thanks Erika - The only thing I'm ever really hoping for is to encourage people to think. I honestly believe that if they do so with a clear determination for consistency - They'll come to the proper (and compassionate) conclusions.

@ aerie - You certainly have a point about our worshiping of the human corpse. Justified of course by the existence of an invisible "soul".

I think often when I see acres of lush manicured cemeteries - "bio fuel". Perhaps those who insist on an animal source of protein won't be too shocked at the possibilities presented in "Soylent Green"? It honestly does seem to be the most efficient use of our remains... :/
Nice for now to have beans as an option!