Are You Lucky Enough To Be Vegan?

I'm not superstitious at all - But here's some things I do know about "luck". 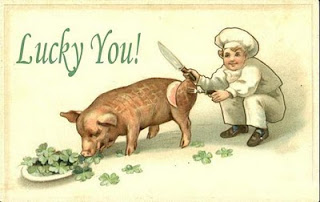 I share my home with "lucky" friends, who would otherwise have had dreaded misfortune. Being born without the advantages of thumbs and god-like ownership over their own lives - Their end probably would have already been done.
Most were useless in the scheme of human plan.  One and all, they were considered burdens to feed or care for. Unplanned accidents... Waste from industries... Not worth the time or trouble to save... Unprofitable residue...  Nuisances and pests. All born "unlucky" to be "purposeless" in a world where everything must have value to the insatiable... That would be "us" the "lucky" ones: Homo Sapiens; Literally to mean the animals born with "taste" and "wisdom". 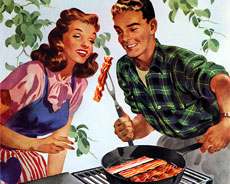 And being born creatures with such "smart appetites", aren't we so lucky to have created systems and diversions that allow us to consume without guilt?  The consequence to others escapes us in myths and lies that we author. This is especially true in our ravenous gluttony of the foods made of flesh.  They are invisible, the blood, bone and bodies of the "unlucky" ones that lost their lives for the sake of indulging ours... 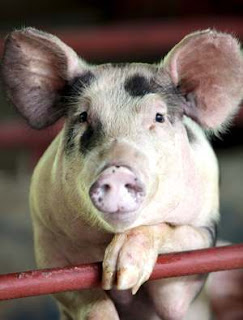 We wise ones, deities of our own making, can sell cellophane wrapped stories, fairy tales, legends and doctrines that excuse us from the most horrid of practices.  These are some "lucky" lies that attempt to validate and reinforce our own species-granted privileges.
Now here's the hitch to being able to utilize those "lucky lies"... We must be "lucky" enough to make a habit of not investigating beyond our comfort zone.  "Lucky" enough to preserve the disguises that allow cons and deceptions to exist.  It's the simplest thing... All you have to do is not think or examine (meat or animals) too closely, and the grotesque realities never have to be acknowledged!

I once had that kind of "luck" when I saw a pig's head in a meat case at the Piggly Wiggly 30 years ago...

It infuriated and repulsed me so much that I complained to the manager!  I told him the pig-head was vulgar and disgusting! And that it wasn't decent to put me, or his customers, through the ordeal of seeing such an ugly thing! I felt completely satisfied when he agreed to remove the apple-biting specimen from view.  I felt content... Even as I wheeled my cart with ham, bacon and chops riding within.  I was "lucky" that my awareness was left unshaken and protected.  Blinded by conjecture and habit, I was "lucky" to stay "blessed" in the bliss of dissonance for many decades afterwards.

But, like most of us here, that kind of "charm" eventually ran out.  For whatever reason, that fragile veil of secret "rites" was revealed for the trick that it was.  Gifted instead to see that behind the eyes of every creature, there is a somebody.  A kin of mine, a kin of ours, that had been born without human "luck".  These are fellow earthlings that only lack our cheat of might and favored lust.  And it's only our unquestioned indoctrinations of the crafty sham, that perpetuates their brutal curse.
And thus, we make the "luck" of others better through our own actions.  We make decisions that alter their fate for the good. We choose not to harm lesser ones. Innocent ones. Helpless ones. We choose not to create victims.  We choose not to prey on the weak. We choose to challenge the false premises of traditions, "exceptionalism" and domination.  We rejected the status quo and live in ways that make things more fair. More equal. More thoughtful and kind.   At the heart of the matter, we choose not to eat these beings who are so "unlucky" not to be us.

I'm a blessed vegan (ha, sounds like "blessed virgin," doesn't it!!!!) who awoke from the same "crafty sham" of "exceptionalism" that you did, Bea.

Thankfully, the awakening came in time to enjoy the real pleasures of life: patting pigs, stroking sheep, kissing cows, all the while knowing that I am not with fork in hand betraying them or their brothers and sisters.

Tonight a commenter on another website accused me of being a hypocrite because I love animals by NOT eating them but I love plants by eating them. He wondered why I see a difference between the two kingdoms.

Every time I tried to post a reply, it got moderated into thin air (a second reply DID go through, but didn't include the answers he is looking for).

Below I'll paste what I initially wrote in response to oneopinion2 at this link -- http://www.idahostatesman.com/2011/03/17/1568998/clashing-sheep-cultures.html -- and hopefully I'll get it to "take" on that site in the morning:

This is the third time I've tried to submit my original response to you, oneopinion2. Perhaps the system thinks I'm responding too quickly? Anyway, I wasn't avoiding your question.

In the reply I wrote before it was moderated into thin air:
1. I asked if you were serious!
2. I quoted French philosopher/writer Voltaire: “As long as people believe in absurdities they will continue to commit atrocities."
3. I mentioned that Isaiah never said that the childlike thought would tame the bestial traits in vegetables.

And now I would add, if I might, that humans and animals belong to the animal kingdom; vegetables belong to the vegetable kingdom.
Fruits, vegetables, nuts, legumes, flowers, grains from plants are God's gifts to all of us, as I alluded to when mentioning Genesis 1:29,30 (but didn't want to really "go there" since I felt you'd retort with the Genesis 9 permission to eat meat, verses I don't see as inspired, spiritual, selfless, or coming from Love).

Any infant knows the night-and-day difference between a baby lamb or bunny and a baby carrot or tomato. How is it that you don't?

Maybe a little investigation of www.CreatureQuotes.com will make the differences clearer?

By the way, the photo accompanying this article of Nestor Barja holding two lambs upside down is sad; he looks like he thinks they are sacks of potatoes. What would Jesus think of that scene, I wonder?

P.S. Hypocrisy bothers me, too. That's why I do my best to avoid falling into that trap. :-)

Well done Bea, the "crafty sham" is astonishingly difficult to wade through for many of us. Thank you for having done so and sharing your thoughts.

Wow, Bea. Just Wow. I can barely find words other than "wow" for this one. This is one of the best posts I've read on any blog. You are one of the people who give me hope. And you give a voice to so much of what I wish I could express, but can't organize my thoughts well enough to do so - at least not this well. Thank you for all you do and for the hope you give.

Hi SBH CLAY - For what it's worth I left my response on the story about the "poor" sheep rancher being ousted from public land... (Tiny violin please.) I know what you mean too about the photo of the two baby lambs being hauled like sacks of potatoes... Perhaps one might even treat potatoes more gently? It's infuriating and sickening to see life handled like things... Maybe it's me but it's doubly so when they are so new to the world. Not even a short little while to be regarded as "precious". :(

Thanks for reading and for getting something out of what I have to say! <3

Hi veganelder - I appreciate that you see my POV. And the more I read, learn and know I fully believe that we have been "hoodwinked" into the system we're in! Half the time I want to scream at the world to "Wake Up!"... I want so badly to tell them that everything could be so much better and right if they stopped living in their bubble of denial! It gets hard living in such a world and having to be "nice" and "kind" to unthinking barbarians. And I'm not talking about those who have no clue, but the ones who know all too well but just don't care. :( But I guess you know all about this too. Thanks for letting me cry and rant. <3

Hello Krissa! If you were able to wade through my very twisty theory--- I think you do fine in organizing your thoughts! Often when I think abstractly, especially regarding what the way we treat the innocent - I have to watch myself because of running the risk of sounding "too absurd" or far-fetched. But then I take a look at what we're doing to them... And all the reality that stays so hidden from the world - And then nothing is too outlandish to describe this deception and this insanity. It IS a world gone mad... And any other way to portray it would miss the mark by a long shot. Thanks for really "seeing" what I see too!