Sanctuaries For Our Food And Our Friends - Part One

I thought my last post about the AFF here in Florida would be my last story on this "disordered" organization... But finding this short Hoosier Ag Today podcast, interviewing a AFF teen changed that. Note that the first few sentences indicate that it is "consumers" and economics that are of the most interest to agriculture. No surprise there...  The clip also says that vegan and animal rights advocates are "aniti-agriculture", as if we didn't consume food too.  But surely they've got that all wrong!

Young Morgan Dawson states that the population will nearly double in the next 40 years and that agriculture has to devise "new ways" to meet food demands. With this I couldn't agree more!

My thought however is to do things in complete reverse of what's being done now.  Currently, we have billions of animals crammed inside warehouses... And countless thousands of acres of crops grown outdoors. 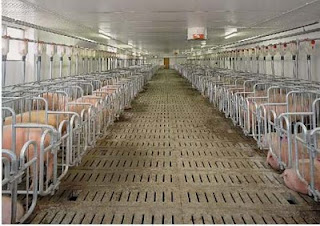 Now, indoor animals must be regulated with electronic "climate controlled" facilities and many drugs. 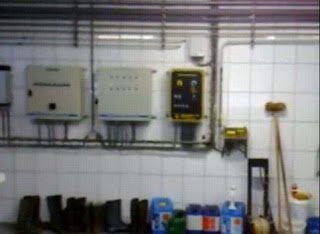 Indoors their waste accumulates to a point where air quality around factory farms is inferior to major cities.  Raising animals indoors is wasteful in water and energy use.  And of course it's downright torture for these beings!  Talk about "intensive confinement": 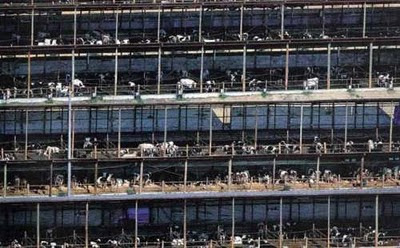 On the other hand, plants that are raised outdoors take up vast swaths of land. These are vulnerable to weather conditions.  Crops must be sprayed to guard against instects and "pests".  And there is also collateral damage done to wildlife that find these foods suitable for their meals too.

Now --- What if we revolutionized the system, removing animals from their indoor prisons and put plants there instead?  What if all the grants, fundings, "pork" and favors that go to producing "livestock" were to go to inovative new forms of high-tech food production instead?
Many such systems are on the drafting boards and blueprint stages but of course without sufficient economic backing they're having a challenge in being realized.  But here's a few that are built and already producing food with closed loop energy systems:
The Science Barge in New York uses state of the art computer technology and an agricultural technique called hydroponics to grow fruits and veggies using much less water and space than field farming.
The Eden Project that is what it's name implies.
The Sahara Forest Project, that is also a restorative technology.
And look what a green marvel is being built in Newark, New Jersey: 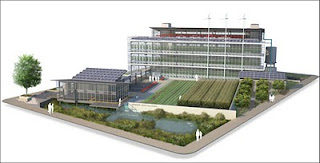 Imagine what kind of future we could have if we planned communities that were sustainable within their own environment and location.  Housing units where people could literally obtain their food in the same building that they lived in.  No trucking food for hundreds/thousands of miles... Food that also supplied energy to your building would only be steps away.  Now that is projecting into the future!
There are a lot of ways that we can make the next decades be bountiful, clean, safe and wholesome environments for both humans and animals... One of my favorites is the brainchild of these young group of "future farmers of America" who created a hydroponic plant by converting (of all things!) an old meat packing plant.  Indeed this concept Conscious Vertical Farming 312 AQUAPONICS is Phoenix rising from the ashes:
Granted... I know some of these systems still depend on sea creatures to produce fertilizer.  But we humans also generate an abundant amount of waste too, that could be used instead, as the technology advances... Thus eliminating our need for "water treatment" plants... Or nearly so.  Genius - Isn't it?
So, you live in a rural area... In a home not a high rise --- Nourishing food could be grown in these systems by building them on top of grocery stores!  What a site to see our foods living on the roofs of the supermarkets we shop in!  The possibilities with this future are endless, sustainable, and most of all allow all living beings their unharmed and *unviolated* place on this earth!
If there was ever a way to provide a secure, peaceful co-existence with the planet and each other surely this is it!  We don't need "glass walls" in slaughterhouses!  We don't "need" slaughterhouses at all!  Glass walls that could protect our real food and our survival is the way to go for "future farming" in the world.
Part one of two
Further reading and exploration:
Dickson Despommier Professor, Columbia University
VertiCrop™
Vertical Farms/Green Living - Leave the Cow Behind

Wow, what great ideas. They are what are the basis of a thriving economy, aren't they? Ideas that WORK for everyone, and do no harm to anyone.

Which brings us to the fish. Yes, why not use human waste? I believe it's called humanure?

Bea, I see that on 3.19.11 Arash Amini, one of 312 Aquaponic's co-founders, is going to moderate a panel on the Future of Agriculture.

Are you going to submit the question about whether they could develop a system that uses humanure to make their business even more "unwasteful" and 100% harmless?

There have been many studies done of late proving the sapience and sentience of fish; so why put them through hell when there are alternatives to exploiting them?

Also, it'd be great to have a place where human waste would be actually useful, instead of sending it through traditional plumbing routes, which require expensive government-run sewage treatment plants.

If you do write in this question, Bea, I hope you'll submit the link to this blog!

Prof. Dickson Despommier is so committed to his dream; it's wonderful to see his eyes dance. His intelligence and enthusiasm are as inspiring as the flowers at his side.

Yes, indeed, Bea, leave the cow behind. And chickens. And sheep. And goats. And pigs. And ducks. And geese. And turkeys. And fish.

Can't wait for your Part II.

"Young Morgan Dawson states that the population will nearly double in the next 40 years and that agriculture has to devise "new ways" to meet food demands..."

In addition to getting out of the practice(s) of exploiting sentient living beings, wouldn't it make sense to halt and then reverse the mind-boggling avalanche of additional human animals implied in the phrase "double in the next 40 years"?

Some sort of equitable sharing of the planet with the other Earthlings (including the plants) would be immeasurably easier to attain if there were fewer humans (some estimate around 1 billion as the magic number: http://www.ecospherics.net/pages/population.htm ).

There are some terrific and thought provoking ideas here...I would suggest some consideration of Mr. Cattons insights about populations and food supply be included in these forward looking and admirable suggestions about ways to transform our current current food providing practices.

Some folks (http://www.vhemt.org/) even argue that the kindest and most compassionate thing we human animals could do for the planet would be to voluntarily disappear. :-)

Thanks SBH CLAY - These ideas do make for a future of hope and prosperity don't they?

I already did submit questions to the panel regarding fishes. I asked: What kind are they? What are they fed? And did they think the fishes had a "good quality" of life? This was a few weeks ago. I haven't gotten a response yet... But if I do I sure will post them.

Thanks for your interest in "part 2" that may be out of order with other posts... But it will still make sense and connection to the original "Sanctuaries For Our Food And Our Friends." I guess that's the beauty of the internet... You can kind of "skip pages" so to speak! :)

Hi veganelder --- I certainly know what you mean about slowing down (halting) the population. But I also know that we humans are a "resource" to countries... The "law" is to be "fruitful and multiply" --- That makes for more consumers and bigger armies. I totally know the mindset into encouraging human prolification. Sadly, I also know what happens to colonies of termites when they run out of rotted wood to consume. Not a pretty thought. :(

I know about vhemt.org. Love the Nina Paley stork video! I found the site shortly after I became aware of what we "had to do" to animals in order to feed our ever-expanding multitude. :( And back 35 years ago when I read Silent Spring and Future Shock I made my mind up then that there was already enough of "me" - So I didn't have to make more... ;)

I'm totally with you on the way-overpopulation problems. I have some ideas that I think are fair, equitable and what I consider very reasonable to address this elephant-in-the-room problem. Sadly, I know my views would be considered totally unacceptable. Ever notice how those things that hinder economic gain usually are?

Anyway -Thanks for the links... I'll have to check out Overshoot in my library. I'm sure I'll find it somewhere buried on a shelf, in between the mountains of "how to" make, raise, feed, clothe, educate babies books. New life is beautiful- Don't get me wrong... But with so many the "miracle" is easily lost. :/

Thanks for the enlightening post, Bea! It's really encouraging to read about humans acting with ingenuity and creativity (rather than just perpetuating the same old violent status quo). There might be hope for us after all ;-)

It's good to know that now and then I manage to encourage and acknowledge something positive.

I'm beginning to see that in the timeline of events each forward increment, no matter how small - matters.

Hope is delicious and essential nourishment to our cause... (yum) ;)

Scurrying off to read part two...

Thanks Have Gone Vegan - Love the "new and improved" name change by the way! :)