Oh say it isn't so!  Murders and terrorists inside of slaughterhouses?


A Canadian who ran an immigration business and a slaughterhouse in Chicago was found guilty of aiding terrorists who killed more than 160 people in India.  "Prosecutors said Rana used income from the slaughterhouse to fund terrorist activities."

Blood Collector
This position is responsible for the collection and shipment of fetal bovine blood from an assigned slaughter facility. Set-up bleeding station to receive unborn calves (slunks) for bleeding.
Extract blood from unborn calves in accordance with Standard Operating Procedures.

1st Shift Kill Supervisor
This position is responsible for day-to-day management of operations in assigned production area. (emphasis mine)

Odd how these positions all require "communication skills" and "no violent backgrounds".  Maybe it's so workers can start on a clean slate destined to make them disgusted and enraged with what they and their fellow man do for a dollar? Just think how a few weeks of boot camp can adjust nice kids to kill up close and personal.

It's no secret the industry from factory farm to the bleed rails, preys on the desperate poor - Most are immigrants... Many illegal.

“If you visit the killing floor of a slaughterhouse, it will brand your soul for life.”
-Howard Lyman

And Gail Eisnitz thoroughly documented the horrors in her book Slaughterhouse - The Shocking Story of Greed, Neglect and Inhumane Treatment Inside Th U.S. Meat Industry with excepts here:


When the pregnant sows are ready to give birth, they are moved from gestation crates into farrowing crates. "They beat the shit out of the sows to get them inside the crates because they don't want to go," said a female worker. "One guy smashed a sow's nose in so bad that she ended up dying of starvation." "We had one too with his nose smashed in," said another. "A 600 pound boar. Smashed him in there. He finally died."

"On the farm where I work," said a worker, "they drag live pigs who can't stand up any more out of the crate. They put a metal snare around her ear or front foot and they drag her the full length of the building. And these animals are just screaming in pain. They're dragging them across the concrete. It's ripping their skin. These metal snares are tearing up their ears...."


"When sows can't stand up anymore and we have to kill 'em to perform C-sections, we wait until within a week of farrowing and we kill her and cut her open, then we drag her outside to the Dumpster. We use a stun gun or we get a hammer and start beating the head. Until they die."
"After a while you become desensitized. And as far as animals go, they're a lower life-form. They're maybe one step above a maggot. When you got a live, conscious hog, you not only kill it, you want to make it hurt. You go in hard, blow the windpipe, make it drown in its own blood. Take out an eyeball, split its nose. A live hog would be running around the pit with me. It would be looking up at me and I would just take my knife and--eerk--take its eye out while it was just sitting there. And this hog would just scream.


"When a cow arrives at the first hind-legger [who removes the legs], usually the legger tries to make a cut to start skinning out the leg. But it's hard to do that when the cow is kicking violently. A lot of times the leggers'll take their clippers and cut off the cow's leg right below the knee--the skinny part. The cow'll continue to kick, but it don't have that long of a reach."


"Outside of the weak ones, just about every cow I stunned had to be hit between three and five times just to get it to go down. There were plenty of times you'd have to make a big hole in their head, shooting them eight or nine times. And they'd still be alive. I remember one time I saw the other knocker at the plant shoot a bull twelve times, and still it wouldn't go down. "


"Sometimes a steer would get its head stuck in the restrainer [the conveyance that cattle ride up to the stun operator in]. You couldn't stun it at that point, so you'd end up cutting its head off while the steer was still alive. Or, there've been a lot of cases where the beef almost falls through the restrainer, and it struggles and twists so bad that the restrainer wouldn't move. A lot of times what happens is we just chop the leg off. We do it with a saw."
And these are the animals "protected" under the Humane Slaughter Act... Imagine the unhappy things that happen to chickens. :(
*******************************************
Now I'm not writing this to educate or inform regular readers... Everyone is very aware of the atrocities that animals go through in the name of "food, clothing, entertainment and science".  So aware and concerned that they've actually done something tangible and meaningful to remove themselves from such harming acts! 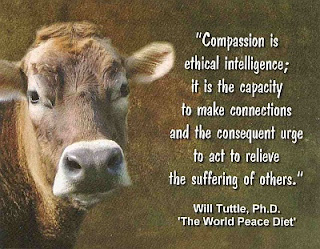 No, I'm hoping to catch the curious lurker who happens to land here... I want them to understand what they pay for every time they buy a burger, a "chop", an egg, or a pair of leather sneakers.  I want them to own the fact that they are the ones supporting crimes against man and crimes against nonhuman animals.  I'm hoping they read Mercy for Animals 25 Reasons to Try Vegetarian and pay special attention to reason #22: 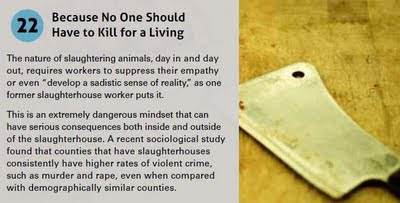 "Flesh eating is simply immoral, as it involves the performance of an act which is contrary to moral feeling: killing. By killing, man suppresses in himself, unnecessarily, the highest spiritual capacity, that of sympathy and pity towards living creatures like himself and by violating his own feelings becomes cruel. As long as there are slaughterhouses, there will be battlefields." -Leo Tolstoy

Please... If you are not already vegan - Give it your very best effort to make it so.

Checked out the first job advertisement as it was in Ontario and was surprised at the number of other languages listed (14!), so yeah, that coupled with no education or experience required suggests exploitation of both humans and other animals. So sad.

This is what people just don't get. It's not just the non-human animals that suffer, it's ALL animals. Violence begets violence. And relying on an animal exploitation lifestyle (food, clothing, sport) is living a life stained by the blood flowing from that violence. And some of that blood comes from the vessels of fellow humans. So even if you care only for human animals ... go vegan.

Hi Have Gone Vegan - Ah... Slaughterhouse jobs listed in 14 languages - But none know the language of love or reason. Pity that such places exist to put both man and nonhumans through the "meat grinder". :(

Hello Harry - You're right. I often try to sway people my way by including the human element into the task of spilling blood. Sadly, most turn off by then... Far too much for them to acknowledge. :(

There IS only one solution - And that is to end the miserable practice entirely; Put down our weapons against each other and harmless victims - And go vegan! That's the ticket alright!