This post is a compilation of some strange, bizarre stuff within the foolish world of animal use.

I don't yet have a "Freaky-Friday" post so here it is!

How would you like to decline an event with this excuse... "So sorry, but I'm attending a Boar Semen Conference that day."

Or what about the next time someone says that cows, chickens and pigs offer the best source of "essential" nutriments for the body?  Here's a great argument for them:

DeFoliart, the Wisconsin entomologist, says that not only are insects nutritious and delicious, they could be an environmentally friendly source of human protein requirements.
"In our preoccupation with cattle, we have denuded the planet of vegetation," DeFoliart said. "Insects are much more efficient in converting biomass to protein."
Insect farming is arguably much more efficient than cattle production. One hundred pounds (45 kilograms) of feed produces 10 pounds (4.5 kilograms) of beef, while the same amount of feed yields 45 pounds (20 kilograms) of cricket.
No bug eating? Good!
How about some yummy human breast milk - That scientists in China have now convinced cows to make and to NOT feed to their own calves?
I know... Isn't it silly for any adult to drink any mammary secretions?

OKAY - What about steak made from poo - Whet anyone's appetite yet?

Ahhh... But what to feed a pig?  I found this on an animal ag site:

Odd to worry about the "ethics" of feeding a pig a pig - But completely fail to monitor our own ethics.
(We are a strange species!)

And speaking of not eating pigs... Seems there's a rash of fake photo-copied Halal certificates that are misleading the Muslim community seeking "lawful" meats.  And we've all seen how genuinely "clean" and "humane" the real deal is - Haven't we?

Here's a bit more bizarre news... Seems it's become more profitable to grow oats as livestock feed than for human consumption.  It really is frustrating competing with "meat animals" for food isn't it?

Pathetic stoopidity a UL "Research" Lab caused the death of 3 Rhesus monkeys. No... It wasn't the death by usual torture - These guys went the special way of neglect through dehydration and starvation.

And here's one wacky nonsensical title for a sorry article "Horse welfare declines after closing of U.S. slaughter plants".   The piece includes the pitiful sentiments about some horse trainer saying his sad goodbyes to his horse Rocky who he rode for 27 years.  The guy really hated to do it - (ship his friend to the slaughterhouse in Canada or Mexico) - But hey - bullets cost money you know!

Finally, what about fish-hunting in a public pool?  Yep it's all for "community fun", "education" and the reinforcement of "ethnic traditions".  And more bothersome than the story was the unending defenses once the event was criticized.  I know many readers here and friends on Facebook diligently tried to present truthful and reasonable arguments against this event (and all animal killing).  I found myself cheering as I read each of your posts!  Thanks be to living tuna for your clarity!!!  And as I left it... We can only hope that some seeds were planted! ;)

So I guess this de-virginizes my lack of a Freaky Friday post... But then again - In this crazy animal-killing world it could be Freaky Friday, Freaky Wednesday, Monday or Tuesday.  All of it lacks sanity. All of it is primitive, barbaric, deadly and wrong! 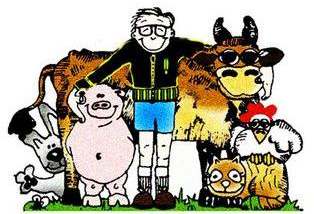 Glad to be vegan! Hope you are too!

Thanks Bea. Hope it's not your last Freaky Friday post. Or Freaky Anyday post. You've got to marvel at the disconnect some times. Extremely sad as we well know but freaky that such significant disconnect (and defence and justification of such) could even exist.

Yep - Been there. Done that. Now happy to be alive and vegan.

Great job Bea, you have been working hard and it shows in this excellent post! I'm with Harry, you must not make this one your last. "Lawful meat", an oxymoron if ever there was one.

Love your work, Bea - hope this isn't the last Freaky Friday post! All the critters thank you for what you do!

Yep, along with Freaky Friday you could easily have Moronic Monday, Terrible Tuesday, Weird Wednesday... Sad.

I read every last one of the 68 comments under the "sorry" article on horse slaughter you cited, Bea.

From these intelligent folks I have learned a valuable lesson: I have been wrong to oppose the slaying of companion horses and sport horses and work horses. It truly is more moral to send a horse on a treacherous journey to a terrifying death so that upscale Europeans can eat his drug-riddled carcass (even though we wish his flesh were fed to starving people) than it is to put to sleep one's equine friend of 27 years. The latter act, while seeming to be kind, is really a cruel betrayal of our humanity: it's a waste of good protein, a way to pollute the ground, and money down the drain.

That being the case, I would have to call The World Peace Diet's author Will Tuttle immoral and insane for declaring, "We ... must regain the intelligence we have lost through desensitizing ourselves to the undeniable truth that from the perspective of the millions of terrified animals whom we see only as food commodities, we are vicious terrorists."

Hi Harry - You're right about needing to marvel at the disconnect... A certain problem arises though - The more my journey (and probably everyone else's) takes me --- The more absolutely convoluted, twisted stuff I learn and hear! Makes one wonder if eventually it's true - That the world becomes (known to our minds) a place unfit to live in any more. (?)

Till then it IS good to be alive and vegan! Thanks! ;)

Hi Anonymous - Sorry for the non-thinking (brutal) comments in the horse slaughter article. I support what you say and thank you for quoting Will Tuttle's wise assessment of our failed sense of justice.

To all friends here... I hope we change things. May our voices never, ever be silenced till we do! ~peace~