Unforeseen demands in my personal life will briefly restrict my on-line activities... I know there are comments previously left that I have not responded to yet... I know my friends will bare with me as I regroup.


But in the meantime I want to post this very important news about an event that will take place (tomorrow) on the morning of July 14th.


Two of the most effective advocates I can name, Gary Loewenthal and Colleen Patrick-Goudreau will be interviewed by animal agriculture spokesperson Trent Loos on his show Loos Tales.


For those who might not know (and where have you been?) - Gary Loewenthal is one of the founders of Compassion 4 Animals and the very successful Worldwide Vegan Bake Sale is his brain child.


Vegan cookbook author and speaker, Colleen Patrick-Goudreau hosts the ever popular Food for Thought podcasts that is a gateway for those who want to learn how to be Compassionate Cooks.


Our movement not only has the power of truth on it's side, but some of the most articulate, passionate and thoughtful advocates we all could ever hope for... Gary and Colleen are the finest among them.


This interview will be posted here after 10AM and will be available for one week afterward.


I think it's unanimous, that we all hope reason and all it's rewards makes it's presence known and understood for the good that it is.


On the other hand, Mr. Loos will endeavor to convince his audience that the issues of animal killing are not all that serious... He will compare activists to Hitler and say we are  "driven by guilt". He will use words like "respectful harvest" and reduce lives to the "production" purposes he (profitably) sees fit.  He will suggest that the old social norms are acceptable and ought not to be challenged.That has always been the carnist's mantra.  But the very idea that this "first" debate is occurring proves that to be all wrong. 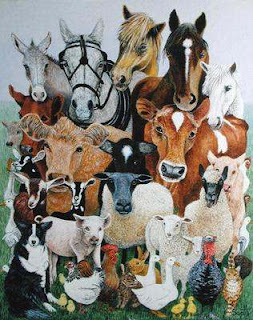 This discussion on the severity of animal killing will only escalate in the future, as this topic is brought to the light of critical thinking minds.   In academic halls, public libraries, shopping malls and employee break-rooms - May the conversations be civil with human enlightenment as it's goal, as the voices of the invisible are finally heard!

Email ThisBlogThis!Share to TwitterShare to FacebookShare to Pinterest
Labels: debate

Comparing activists to Hitler? I made the mistake of clicking over to the Loos website and looked at the pic of Mr. Loos. Uh, when somebody dresses up like a drugstore "cowboy" and uses buzz phrases like "common sense" then often little more needs to be known about their philosophy or attitude toward life on this planet. (I'm old and get to use shortcuts in evaluation).

I may be in error re Mr. Loos but I'll take that chance. He is spot on in noting that part of the motivation for activism on behalf of the other animals is guilt. Those that don't feel guilt about human behavior toward their animal relatives are limited beings that are seriously damaged (perhaps beyond repair).

You're right though, it isn't so much convincing Mr. Loos that is important (and unlikely) but rather the speaking on behalf of those with no human voice. This must be done without cessation.

Great picture! Thank you for posting it.

I hope all is well with you and your life and please hurry back, you'll be missed.

Firstly ditto Veganelder - Bea, I hope all is well with you and your family and look forward to your return. And yes, great pic!

I agree that the fact the debate is happening at all is worth focussing on and my impression is that such discussions and debates are becoming more common. There is no doubt that people / Society need to be receptive to change - debates such as this provide keys to unlock closed minds, allowing those minds to be receptive. Not everyone will grab a key, but some will. And as more and more of Society's members re-awaken to the horror of what is accepted as normal behaviour, normal diet, normal clothing, what is classified under normal will change. For the better for our fellow beings. These debates provide some proof that such hope for a gentler world is not in vain.

Sending you best wishes from all of us at Avondale
Harry

Hi veganelder - I agree with you totally on your shortcut assessments. It doesn't take much to evaluate a cardboard figure who thrills in participating at the events of the "Grand National Cow Palace". Sad.

A few things I found interesting about this interview though was how in one breath he bases all his use of animals in the "science" of survival... And then with a switch of smoke and mirrors asks Colleen bluntly - Is she a Christian? I loved her answer BTW... Her "religion" is based on compassion. I don't think anyone could or should argue with that.

And of course he brought up the unfortunate animals killed in harvesting plants... To which Colleen again reminded us all that it's not about purity. And that given the system we've created it's almost impossible not to cause harm. I agree there too, had we adapted better ways with hydroponics, greenhouses, etc. to feed ourselves, we could have eliminated nearly all "accidental" killing as well. If only...

And Gary did not disappoint either... I can't believe that Loos actually belittled the argument so by mentioning plant "pain" - But so he did. Gary's response was wonderful comparing horticultural practices of trimming shrubs & grass to harming sentient beings. No, most people wouldn't swerve their vehicle to avoid hitting a bush - But certainly *most* would do so to avoid harming a cat or squirrel. I think Loos failed miserably at bringing good (or new) arguments to the debate. (no surprise)

And since the opportunity has been forced on me to restrict my typing (I'll explain as I can)... I've had the chance to watch a few interesting videos lately. One "Auschwitz: Inside The Nazi State", caused me to think over and over again at who the oppressors really are. Who is more likely to condone an "adult euthanasia program"? A vegan or the likes of Loos and their relentless practice of creating meaningless victims? I know we all answer that in unison.

Lastly, I think Loos showed his genuine wafer-thin "ethics" when he confessed to "loving" animals but has no misgivings about deliberately killing coyotes while driving in his car. I can just see him aiming for them in total ego-centric disregard. I pity the three young girls that must look up to this kind of dad and call him a "man". :(

Thanks for your good wishes - It's almost funny... It probably took less than 3 minutes to read my message to you - Yet - yikes! It's taken me nearly an hour to type. As I heal I fully intend on sharing the "joys" of shoulder surgery. Ugh! :/ Please continue to miss me as I certainly miss you all too!

Hi Harry! I hope you read the comment posted before as you'll see I have a "clipped wing" too... Both Cleo and I are gimping along as best we can! What a pair we are - Her with two bad legs and me with one good arm. :/ It's really made me view her limitations in a new perspective... I think she's quite the champ for carrying on as she does. I certainly complain a lot more than she does - that's for sure!

I know exactly what you're saying about the increase of public awareness and debates happening in social situations. In fact as I was in a waiting room recently, a woman struck up a conversation with me about how much she loved animals... I listened carefully as she told me of her dogs and cat. She even said bluntly "I love animals". I know it wasn't quite "pc", but I never let the chance pass me by - I had to ask her... "So you're vegetarian right?" She then explained all her "reasons" for not caring for cows, chickens, etc. And then, as I'm sure you know, all the "debating" of issues ensued. Well, she remained unmoved even as my husband pitched in about the practical health/environmental issues...

But --- The room was filled with people not actively engaged in the conversation but instead were watching a tennis match of sorts... Points here. Points there. One or two of them I'm sure will "grab a key". That's why it is so very, very important that we not ever let this subject lie unexposed. I think we've created a first generation where this topic has become un-gagged.

Yes, I'm all for that gentler world - even if it takes public "violent" discussion to awaken the masses... The centuries of silence have gone on far, far too long.

Thank you for your kindness and support Harry. Even though you're an ocean away, I know we all stand side by side as we defend our friends. <3

Oops, I missed the interview, but I'm sure Gary and Colleen did a great job!

Shoulder surgery? Oh no! What a pain. Literally I bet! I wish you well and hope a speedy recovery for you as your "typing" is invaluable in easing the way to a gentler world. I also think you're right in that more attention was probably paid to the conversation in the waiting room than appeared on the surface. And since we never know what points will resonate, I'm sure something stuck with at least someone! :)

Hi Have Gone Vegan! Sorry you missed the interview. I tried locating an archive - But "poof" it all disappeared without a trace. I'm sure had there been some "points" made in the animal ag perspective it would have stayed up forever. Honestly, the only thing you missed were the very narrow minded views of Loos and his animal using agenda. No great loss, you've heard it all before.

Yes, surgery of any sort is a pain. Believe it - In the future I intend to not "need" any of it, ever again!

Regarding who we do or don't influence? I'm at a point where just speaking the truth has to stand on it's own merit. To worry over everyone who may/may not be reached is pointless... The main thing is to seize every opportunity to speak out. But you know this - Perhaps it is another "paradox"? To once be shy and quiet to becoming vocal and opinionated?

Anyway... Thanks for all you continue to do to help set things right. ;)