While I piece together an upcoming post on direct action as a method to raise awareness about animal issues - I thought I'd interject this post about a few animal rights activists in Iowa who "taped" a "Go Vegan" sign on a butter sculpture cow.


Now... I'm not about to go into all the reasons these cow sculptures are a gigantic farce because I've already done that before and before that.  But what I will do is admit to a lot of skepticism about the alleged butter caper. The story just doesn't make much sense! Wouldn't a group that was able to scale a wall and sneak past guards have more "destruction" in mind than a sign taped to a coagulated fatty substance?


Or would it be more reasonable to think that these Iowa animal ag folks had a sneaky idea to promote their absurd butter-cow/dairy/egg and pork politics? 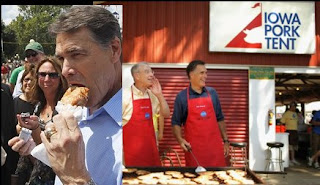 Truth is... Doesn't matter much what you eat at the Iowa Fair - As long as it's got an animal part or secretion in it... 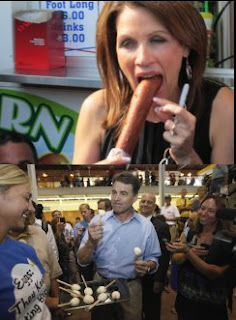 Yep... There's "activism" and "politics" all around butter.  So says the winner of the "dairy princess crown".  She likes to go to day care kids and teach them all about cheese and "milking units".


But before, during and after all this politicking and partying with meat, eggs and dairy there's stories that bring truths back in focus... Like what I see in this cow's milk propaganda photo: 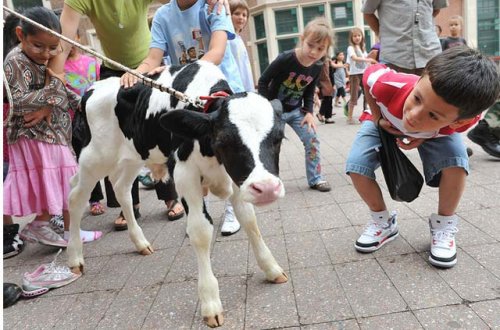 Sure the kids are curious... Who wouldn't love a new born calf? Especially the mother who bore him?

But here's a boy with new leather shoes...  Meanwhile a girl's pink leather sneaker is being stepped on by the poor, confused, mother-less baby calf... Contrast this with the reality that humans actually cut the feet off of baby calves... Sometimes when their still alive!  And bash their skulls to make them not be so... And you've got a culture totally at odds with who they want to be and who they really are!


All of it is sickening and shameful!


Don't like the dishonesty in Iowa, in dairy or in your own life?  Then quit with the unnecessary and unkind animal killing and animal eating!
Go Vegan - And live in a Gentle World

Is there any question as to why folks seem to be unable to think clearly or understand the consequences of behavior?

Our culture is structured around half-truths, hypocrisy, lies and ignorance. Annual 'hypocrisy festivals' like state and local fairs would make any propagandist worth his or her salt smile with pride.

There is one hope that is a big one...everyone seems to know something is wrong...many are just having a hard time figuring out what it is because their skill set is deficient.

Per usual, your word pictures and the pictures/films you use to speak 1,000 words say it all, Bea.

So, left with little to add, I thought I'd mosey over to Creature Quotes and select a quote (from Chapter 27's unknown authors) that describes how I hope you see yourself:

"A hundred years from now, it will not matter the sort of house I lived in, what my bank account was, or the car I drove. But the world may be different because I was important in the life of the animals and the creatures on this earth."

Thank you. Have nothing to add to your words (I just nod my head) but a little to add to VE's: thanks to Animals Australia - and Lynne White - the live export industry has been brought into the Australian community's consciousness. Lynne is a remarkable woman with matching integrity and her investigations are nothing short of incredible. But now a signed 'stat dec' has been handed to the government by an Indonesian abbatoir worker claiming he was paid to kick a cow for filming! Shameful, pitiful lie. I smell some dirty, blood-stained money having been handed over in a grubby, brown envelope. To worsen this, kicking these poor beings was probably the least cruel practice that was filmed! It saddens me to once again see how low my fellow man will stoop.

Veganelder - I'm totally with you about the ruse being set up deliberately to keep people unaware, unthinking and fearful. Our politics is such a corrupt sham! Following the many money trails confirms it all!

It's odd to say that confusion is our only hope... Yet, it's true. Maybe it's like being on one of these rides at the "hypocrisy festivals"? You only know how topsy-turvey and tangled up you've been once the ride stops and you can assess reality/gravity?

I know you've said it before and it deserves repeating... We are in for one heck of an awakening - And it won't be pretty at all! Let's keep the barf bags handy! :/

Thank you CQ - A picture saying it all surely is the one with the calf... All someone has to do is accept the position of that poor baby among the kid/man-handlers and the story tells it's self.

It makes me just want to scoop him up and return him to his grieving mother... I know that's what anyone with a bit of compassion would like to do. All present company included!

But being that we can't- that hundred years from now Creature Quote says it on behalf of all of us...
Thank you! <3

Hi Harry - I've too have been following Animals Australia and their constant push for responsible actions from the politicians and the industry... (is there a difference?) You're a sea away and the corruption is no different than my back door!

I'm also aware of the allegation of a pay-off to treat the victims more harshly than the "usual" throat slitting that is "normal". Ugh! :(

Yes! Lyn White is a remarkable woman and is owed a huge debt of gratitude for exposing the horrors these countless beings face --- Even BEFORE they are slaughtered. Live exports is surely one of those tortures that needs to be banned immediately! Just heartbreaking! :(

I know Australia also has these "patriotic" meat eating events and certainly lots of greasing palms with blood money... Stay with the good fight neighbor! Our common enemy of ignorance and greed unite us all! ;)