A terrible incident has occurred in which almost 80 people have been infected and one person dead from an outbreak of anti-bacterial resistant Salmonella connected with "turkey" products.


Despite a recall back in April of 55,000 pounds of Jennie-O turkey meat, the USDA and CDC had yet to name the source of the current outbreak.  And really, it's no wonder about the confusion - The recall was for products packaged on Nov. 23, 2010... Just days before the sacrificed one's were due for worship on holy "Turkey Day".


The recall has since been expanded to 36 million pounds (16300 metric tons).

I'm not a mathematician but one turkey weighs about 28.2 pounds.


This is incomprehensible cost in bird lives. :(


It's tragic in all ways... To human life and safety. The waste of grain, fuel, water... And the damage to the environment.


It's hard not to see flesh for the destructive curse that it is.


But here's a happier story: Tofurky has just announced the opening of a new plant and is nicely on target for market expansion. Turtle Island Foods: Revolutionary Thinking 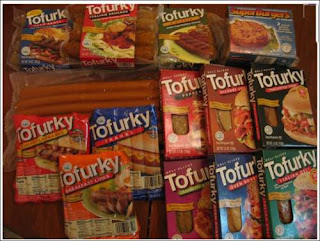 And this new facility includes: solar power to heat its water; capture heat from the refrigeration system that can be used as heating source; and employ high-efficiency processing equipment as its pursues LEED Platinum certification.
Check it out!


Please use compassion and good sense when you gobble...

I bought six Tofurky Vegetarian Roasts last Thanksgiving, used up two of them and gave away two of them, so I have two in my freezer for three months from now!

I didn't realize they'd expanded the line of products so much in recent months. Will have to try those 'dogs.

A friend of mine is on one of the Tofurky boxes, with the NASA space shuttle in the background.

Thanks, Bea, for pointing out the benefits to everyone, including Mother Earth, of purchasing planturkies instead of the animals, who would rather be our friends than our food.

I would suspect, in the case of the "processed" meats (hot dogs, bologna, salami, pepperoni, etc)...that few can taste anything but the spices and flavoring agents. I would also suspicion that very few people could tell the difference between those items that contained corpses and those that didn't. Most of what people eat is due to habit, my understanding is that it takes about 3 weeks for a food item that tastes unfamiliar to become familiar. Some tastes will be more preferred than others but...what's new? So, the choice is to eat to harm or eat to save the planet...hmmm.

Hi CQ! That's a great idea and a generous gesture to give away Tofurkys... I'm assuming to both those that have eaten them before and to those who've never tried them? In the latter case, you never know who might get (gently) introduced to the idea of plant-based living!

Cool about the NASA connection - I certainly consider vegan-meats a vision for the future!

We don't eat them that often in my house... It's an occasional splurge reserved for a quick "no one wants to cook" meal... Come to think of it... Tonight might be just such an event! ;)

Veganelder, you're totally right about the flavor factor. Once someone gets over the idea that they're made of *yucky* plants, I think they'd be surprised at the comparison in taste...

Gary Yourofsky does a great job at point out these indoctrinated preferences... He points out that most people who eat flesh can settle for a meat food that rates somewhere on the 1-2 scale (I know I have)... But when it comes to "veg" foods, everyone expects a 10+ or better. Objective minded people need to challenge themselves more on what they call good tasting food...

No - I'm certainly not a "foodie" either. Or a "health nut" for that matter. Like you... I'm here for them! And in that respect - Everything tastes just fine! ;)

Ah, as was written on another blog ... to sate the palate. But what poorly (cruelly) educated palates to sate. My palate is a whole lot richer for its re-education!

Thank you Harry for the poetic verse & for the spirit from which it comes!