Hey Butterball! I'm on the turkey's side! 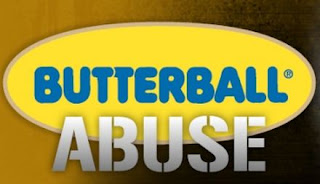 Below are some of the comments left on Meating Place a flesh-peddling industry forum... You have to be a member to read/comment - But trust me - The responses below are accurate.


I get Meating Place daily - Most of the articles are of a technical nature or relate to news that has financial significance for those in the biz.  But when industry practices are exposed - As happened (again) today with the Mercy for Animals Butterball investigation... The forum alights with absurd defensiveness:


In the following you'll find people who are more concerned with the damage done to a trademark, then to the victims:
I wonder how these people can deface the Butterball logo in the video? is that legal? Can Butterball sue for illegal use of logo? How much do you think they can sue for damages? The barn was not owned by Butterball? Butterball, do you have good lawyers?
Thursday, December 29, 2011 Posted by An Old Man

Someone who will blame the turkeys for "roughing" each other up:
This farm was owned by the Smithfield and not Butterball before they split then merged into Butterball. Give the new owners a chance and time, they will make the improvements necessary. Meanwhile, it appears that most of the injuries are caused by the aggressive nature of studs. Watch National Geographic and wild rams beating their heads to the death. This the natural behavior of males in a reproductive mode. So if you take away the pictures of the blood and injury, you are still left with improper culling, rough handling of birds. This may not raise to the height of criminal abuse but certainly not acceptable by Butterball management.
Thursday, December 29, 2011 Posted by Former EE

The dolts:
you gots to have a little slap and tickle sometimes....
Thursday, December 29, 2011 Posted by clucker

People, this is a SEMEN COLLECTION facility!!! Just like all turkeys can feel pain, fear, stress, and suffering, there are some psico turkeys that have to have a little "roughing" so they can get excited and "deliver". Get it?
Thursday, December 29, 2011 Posted by JC

Someone who wants to shoot the messenger:
The footage was taken secretly over a three-week period ending in mid-December, AFTER which the group FILED A COMPLAINT with the Hoke County District Attorney. Butterball has a zero tolerance policy for any mistreatment of our birds or the FAILURE TO IMMEDIATELY REPORT MISTREATMENT of our birds by any associates. The MFA should ALSO be prosecuted for participating in the filming of the abuse. They can not be allowed to climb above the law.
Thursday, December 29, 2011 Posted by Stewy

The Excuse-itarian:
Now for the record i have nothing against vegans,I have many friends who are. But at the same time i have seen them go to great lengths to stop the processing of meat. I have also seen where they set up people in places to do the dirty deeds and then press charges in the hopes of shutting down the plant. I am not saying all vegans are like this but I have seen and know some who have done this.If the workers truly did this then i agree that they should be fired for there actions.
Thursday, December 29, 2011 Posted by RM

The pragmatic worrier:
We as an industry need to stop shooting ourselves in the foot. It's hard to defend why I love meat and working in the meat industry when someone gets footage like this. We have got to spot these infrequent incidences and make sure they are taken care of before another vegan tries to take out our industry, our jobs, and our way of life.
Thursday, December 29, 2011 Posted by Meatatarian

The skeptic deniers:
if the feds raided must have seen something that would provoke this. i will wait to judge till all the info comes out. i am sure this company will take immediate and swift action if needed. customers and consumers simply do not tolerate abuse and mistreatment of any animals that are being killed for the table.
Thursday, December 29, 2011 Posted by making the grade

The 'investigators" are probably the ones performing the cruelty for the cameras.
Thursday, December 29, 2011 Posted by Dusty

I have to wonder... HOW did a guy with a video camera just "happen" to be present when a worker was abusing the turkeys? Did he have psychic powers so that he KNEW there was going to be abuse and WHICH barn was going to have an abuser in it? Most curious. It is not as if all these workers are spending time abusing turkeys...they wouldn't get their jobs done. Now, the question remains, and it is a very serious question...HOW did the videographer know WHICH barn to visit and during the exact time the abuse was taking place? Or is this another MFA "Ohio" maneuver, where the abuser has "arranged" to do the abuse for the camera? With the Mercy for Animals people behind it, one has to ask these kinds of questions. Faking abuse in videos about animal issues has been a problem since the 1990s when the animal rights folks decided that the end justified the means.
Thursday, December 29, 2011 Posted by Laurella Desborough

The spineless:
I agree that the turkeys should not be mistreated. But - we should all be vegans?? - & unemployed???
Thursday, December 29, 2011 Posted by old meat packing mama

The vindictive:
Surely the cameraman and the MFA will also be brought up on charges for aiding in the cruelty to the birds in question. The way I read it, company policy was not followed by their stooge, which was probably made known to them and more than likely signed off by them in the terms of their employment.
Thursday, December 29, 2011 Posted by hoss

(Words fail me here)
while I abhor animal abuse such as described there is absolutely no chance I'd ever adopt a vegan diet. if MFA thinks they can swing people to their side they are wasting their time and money!
Thursday, December 29, 2011 Posted by poutlerer

I think poulterer is wrong though... Had I seen this video years ago (before)... I would have been on the turkey's side in a jif! ;)

But in the end, it really doesn't matter how this video was obtained... What matters is that if you are using living beings for your ends- You are a participant in their demise. 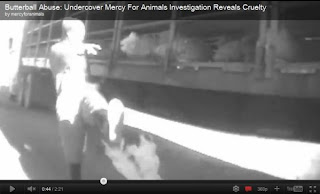 You are condoning the torture AND killing of guiltless animals --- despite the obvious, easy, rational and kind alternative.  There is no right way to do the wrong thing! There is NO "humane" animal- food folks! Nada!

"There is no right way to do the wrong thing" sums up the subject matter of all your blogs, Bea.

Doing the wrong thing, or condoning it, leaves people in such a stupor that they can't think straight.

Anyone who truly desires to do right will find all sorts of opportunities to do so. New ideas are just begging to be discovered!

Better yet, they wouldn't have to worry about polluting the workplace with violence, the environment with noxious waste, the neighborhood with criminal activity.

They could enjoy a slice, not of bruised and battered Butterball turkeys, but of peace-filled Tofurky -- and of heaven on earth. :-)

Interesting stuff...I really like how you categorized the comments...my favorite was the one from RM. They wrote: "Now for the record i have nothing against vegans,I have many friends who are. But at the same time i have seen them go to great lengths to stop the processing of meat. I have also seen where they set up people in places to do the dirty deeds and then press charges in the hopes of shutting down the plant. I am not saying all vegans are like this but I have seen and know some who have done this..."

I wonder where he lives...I have trouble scaring up another vegan within 5 miles of me but he has many friends who are vegan...he knows what they do and how they do it and he has seen it (in person?). I'm envious of all the inside knowledge he has. What a cosmopolitan person! To have lots of vegan friends, know all about what they do yet still be tuned in enough to killing to read articles and post comments on a killing industry website.

I was reminded of the scene in the movie Splash where John Candy was all excited because his fictional letter has been published in the Penthouse forum. My best case take on RM is that he smokes lots of 'whacky tobaccy' and has a grandiose imagination. My worst take is that he is some hired liar for those who kill.

Thanks for your efforts on behalf of the animals, Bea.

Hi CQ! Your suggestion that animal ag-related industries look beyond their current stuppor to see how many new vegan products could be made that would have a market - is spot on! It's just narrow thinking that makes them falsely believe that what they do with nonhumans is the only way to provide "food". Talk about stuck in the past! Dangerously so!

My hunch is that if we could all come back in 100 years we might find a world of alternative nourishment - At least that's my hope. In the meantime thankfully, we know there's an abundance of tasty, healthy nutrition available as things are... Plenty of yum in a peaceful plate! ;)

Thanks for the visit & Happy New Year! xox

Happy New Year veganelder! Yep! You read the exact same thing into RM's comment that I did! I know of another vegan 50 miles away... And he knows "many"? (fibber!)

But he's not the only one. I've read many times that such and such "animal producer" claims to have contact with "radical" animal rights friends. A guess is that one or two acquaintances might toy with a "meatless Monday" idea and be forever labeled as an extremeist vegan. Sigh.

I know what you mean about plants within the industry... But that might actually be a good sign. We're getting noisy enough to warrant infiltration! A reason to stay loud and focused! ;)

Thanks for all your efforts to "go to great lengths" too VE - You are an inspiration!