The sale began—young girls were there, Defenseless in their wretchedness,
Whose stifled sobs of deep despair Revealed their anguish and distress.


And mothers stood, with streaming eyes,
And saw their dearest children sold;
Unheeded rose their bitter cries,
While tyrants bartered them for gold.
And woman, with her love and truth—
For these in sable forms may dwell—
Gazed on the husband of her youth,
With anguish none may paint or tell.
And men, whose sole crime was their hue,
The impress of their Maker's hand,
And frail and shrinking children too,
Were gathered in that mournful band.


Ye who have laid your loved to rest,
And wept above their lifeless clay,
Know not the anguish of that breast,
Whose loved are rudely torn away.
Ye may not know how desolate
Are bosoms rudely forced to part,
And how a dull and heavy weight
Will press the life-drops from the heart. 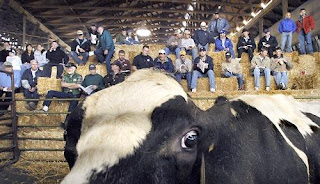 Now I know many will criticize the dreaded comparison... As for me, it's crystal clear that the analogies fit.


886 cattle and calves and a Young Farmers’ Club slave auction were just some of the highlights at Bakewell auction.
And when even the industry folks make it part of their "livestock" show -
Whose to say it shouldn't be so?


There's much to correct on the disturbing and dangerous systems that peddle flesh as a commodity.

Email ThisBlogThis!Share to TwitterShare to FacebookShare to Pinterest
Labels: Free the Slaves

Well the comparison seems pretty clear to me too. And it would include using sheep for wool (even if we didn't eat them) and bees for honey and wax. It would be nice for us to just get over this exploiting mindset.

I don't understand, Bea. Why would the young farmers feature one of their own females in a slave market? Is that man parading the girl around with a stick? Is that white thing she has on intended to look like a Burger King bag? Is she supposed to be a piece of meat? Huh? How could she be smiling? I'm stumped.

Loved the haunting artistic scenes you dug up, as always. Per the last illustration in the blog, when will we be able to check off the last -- the lowest -- set of rights on that list?

Speaking of "lowest," 'tis curious that the sound that a cow makes is called "lowing" in AWAY IN A MANGER:

2. The cattle are lowing, the poor Baby wakes.
But little Lord Jesus, no crying He makes.
I love thee, Lord Jesus, look down from the sky.
And stay by the cradle till morning is nigh.

3. Be near me, Lord Jesus, I ask Thee to stay,
Close by me forever, and love me, I pray!
Bless all the dear children in Thy tender care
And take us to heaven, to Live with Thee there.

I've been reading a couple of books...The New Jim Crow and Slavery by Another Name. These books cast great doubt on notions that "freedom" has been achieved for African Americans. Very disheartening reads.

They make me wonder about the persistence of racism and concomitant attitudes and behaviors...and by extension about the very deep roots of specisism and the oppression of any/all who are "different" and relatively powerless.

Excellent post! As for that poor woman being paraded around like a piece of meat, here's another picture that is just as bewildering: http://www.masseyfeeds.co.uk/Images2/Bakewell-YFC-photo-web.jpg

They were "selling" young women and even children in their fake auction fundraiser for charity. There were a few young men, but as you can tell from the picture there were mostly young women and children being "sold".

@veganelder, you make an excellent point. I plan to read that book, as well.

@Bea, this post reminded me of the firsthand stockyard-rescue experiences described by Gene Bauer, of Farm Sanctuary, in his book of the same name. Heartbreaking in every respect. (I agree with CQ -- the illustrations are powerful adjuncts to this script.)

Hi David! I'm totally with you... The sheep for wool, the bears for bile, the bulls for entertainment, and all the others we find so many "uses" for.

I'm so ready to get over this nasty business that most say is our "only way" to survive. It's a dirty lie...

Thanks for the validation.

Hi CQ - Yes, it is one of "their own" being paraded like a hunk of meat. The reason? I'm not certain, but I would venture to say it's another degree of the way the hierarchy goes... What better way to assert yourself not only to oppress the "lowly" animals - But the (lesser) opposite sex as well?

Glad it resonates some truth for you - Thanks for the visit.

Thanks veganelder - I agree that we are still very far from the kind of "freedom" we like to think we've reached. Not for racial injustice or sex-based inequities.

Just a quick look at the odds of being incarcerated if you are black or Hispanic. The courts still work in your favor if you're "white".

And being that for more than 200 years we still haven't had a woman sleep in the "white"-house without a more "powerful" man under the sheets with her - is telling too. And now of all things we've got a bunch of shriveled, repressed men wanting to dictate what she can/can't do with her reproductive abilities. Ugh!

No, we're not anywhere near where we ought to be... And with that reality I see the fairness owed to Others that much further down the line. It sucks. :(

Hi Vegan Rabbit - and YIKES! That image is sure creepy! But I guess when you're in a group of 20 or so individuals - And not a one of them has any visible ethnic appearances... You can get away with anything.

I wonder too sometimes... Are they making fun of the situation that slaves were once in? Sort of like a re-enactment that is meant to be a "joke" but really keeps the wounds and scabs picked so they never heal?

I don't know - Maybe I'm giving these marginal brains a lot more credit than what they warrant. (?)

The whole idea that any life - any age, sex or species can still be bought as "a thing" - is an abomination! Thanks for feeling the rage with equal passion!

Hi Ingrid - Yes, you bring up a good reference to the livestock auctions by mentioning Gene Bauer and the lovely Hilda that was rescued on a dead pile. Since you know the story maybe you'd be interested in seeing the last remains of the Lancaster stock auction. A decrepit place - I wish we could shut them and every slaughterhouse down...
http://www.youtube.com/watch?v=5opalhXqYdk&feature=related

Thank you for your vision and for seeing the animals for the special beings that they are!

Bea, thank you for posting this. I am tired beyond caring of people who are timid about making this dreaded comparison. Every single oppressed group at one point has made a strong case against giving a shit about members of other oppressed groups -- one very recent example is the second-wave feminists who decried lesbians and lesbianism (many of them still do of course). Apparently the message is that we as a species are only capable of a certain amount of compassion, so we have to decide where to "spend" it. Well, that scarcity model of caring will get us about nowhere in the end. Injustice anywhere is a threat to justice everywhere, regardless of species. Period. No possible way around that. So thank you. :-)

Hi Miriam - I am so, so sorry about the over-sight in posting your comment. I'm glad I caught it in my spam folder --- It must have gotten there because the original post is a year old. (?) Regardless --- Sadly we know the issues are still pertinent to this day. As is the stingy-ness as to where our concerns for one group over another ought to be directed. :(

Just yesterday I made a plea to the Billion Rising group that as women we ought to care about the exploitation of the female reproductive system in animal ag... That it's a direct reflection of a system that oppresses, uses and objectifies the feminine - That this power-based domination is felt by females of *all* species. I don't know if a single "feminist" heard me. :/

No --- I just don't know what it takes to get people to make that connection - Or if as a culture/society we'll even survive long enough to figure it out. I'm no help here --- Just wanted you to know I understand all you say --- And agree that their denial of "the other" is frustrating and terribly sad.
Thanks for dropping by - And for sharing your POV.