Dairy Cows go to Central Valley Slaughterhouse... With Bells On!

In the video below Erica Meier, Executive Director of Compassion Over Killing explains what was documented at the Hanford, California Central Valley Meat Company.


This is the investigation video...

Or you can take my word for it that it shows:

This "roughing" up of "livestock" happens all the time --- Following "humane" protocol or not.  All of it is heartbreaking. Sickening. Vile. I just don't have enough words to say how horribly ugly the whole deal is!

But as we all know it's not only the used-up nonhumans that get bullied around:
In in Dec. 2011, Central Valley Meat Co. was also cited for violations in worker’s death.
"Leopoldo Gutierrez, a sanitation worker, was killed in a meat blender accident in February. Gutierrez’s neck was broken when another employee, thinking the machine was empty, turned it on while Gutierrez was cleaning it."Cal-OSHA found the company didn’t ensure that the machine was de-electrified and locked out so workers couldn’t accidentally flip the switch on. The agency hit Central Valley Meat Co. with $49,920 in fines." -- Seth Nidever

However, by their logo - You could never tell that a single "hare" was out of place!

And so this queer visual mishmash of lollipops and blood reminds me of the other cute guy that represented Westland Hallmark when they were found "processing" 143 million pounds of questionably "unsafe" meat. 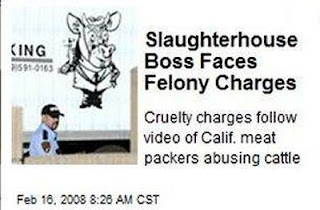 And finally, not to be outdone the last of the folksy images meant to represent victims - comes from the MeatingPlace Daily News. Here's Ol' Bessie Cow with that adorable bell around her neck! Don't you know everyone of their "ladies" wear these right down to their last dance on the kill floor! After all... They tell us time and again that these dairy cows are treated "just like family".

Tired of being a part of roughing-up precious lives? Compassion Over Killing has great resources for those seeking information on becoming vegan. For those who have already done so - Be relieved that you have no hand in these brutal atrocities. Thank you. <3

As always, thanks for the eye openers. Bows to everyone who reads your blog and moves a little closer to being vegan.

Hi veganelder - That's exactly it. Where these people work, what they do for money, follows exactly what was "caught" on tape. Nothing "isolated" about it... Bad, terrible things happen to those on their way to being killed.

But what is mind-boggling is how many people really believe that "good, hard working" people just do an "honest" day's work in a packing plant. Even on the "dirty" end of the process. People will believe whatever is necessary to remain blissful. sucks.

As usual, thanks for calling it as it is.

Hello David - I hope this makes it clear why I and others, often depend on kind folks like you to remind us of the good parts... Of the mayflies and the pure moments of life.

Thanks for all you do providing that haven.

Hi Packhorse --- The Manson family - That would be very funny if it weren't for being more true than not. That's the animal users for you though... Lovin' their "stock" all the way to the knockbox. :(