The Fair Flu: Eat Your Pork- Just Not With Pigs- The Irony!

There's a few new ugly bugs circulating the human population lately (and again): There's the H1N1 and now the H3N2v flu strain... Most infections with the H3N2-variant flu have been in people who visited pig barns at state and county fairs.

And in Iowa there are the re-emerging diseases in pigs.

And with county fairs gearing up for their show-tell-and kill festivities - Here's a round up of advice for participants who wanna watch:

Wash your hands before and after exposure to animals, don’t eat or drink in areas where animals are kept.

Visitors and exhibitors should wash and sanitize after touching any livestock and should not eat or drink in the animal barns, Miller said.

"Washing hands before you eat, every time you eat, greatly reduces the spread of disease. This is particularly important after visiting animal exhibits or being in direct contact with animals."

Never eat, drink or put things in your mouth while in animal areas and don’t take food or drink into animal areas.

“By not eating around farm animals, you greatly decrease your risk of getting the flu.”

Make sure there’s plenty of hand sanitizer in all of the livestock barns and signs up reminding fair-goers to wash their hands and avoid eating in the barns.

Don't drink or eat near pigs, and don't take food into animal areas.

Guests of the fair shouldn’t touch the swine and don’t take food into barns.

Fair attendees should avoid carrying food or drink or putting things in the mouth while in the animal display areas.

Soap, water and frequent hand washing are the only ways to prevent the spread of infection when people, animals and food come together.

People who have contact with these animals should take precautions such as washing their hands, not eating or drinking in areas with swine.

And repeated through the industry handlers in regards to the 289 cases (15 hospitalized/1 dead) of H3N2v flu virus in one month's time:
Never eat, drink or put things in your mouth while in animal areas and don’t take food or drink into animal areas.

And in North Carolina after an E-coli event at the fair they are putting up barriers in this year's fair... Yes, (ironically) even the "petting zoo" is "hands off" with the animals. 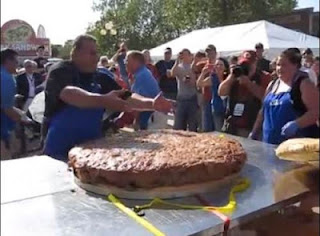 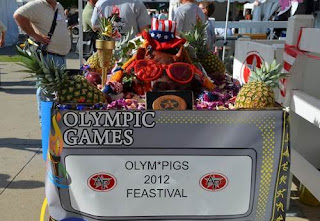 There's not a single health issue that anyone can see... 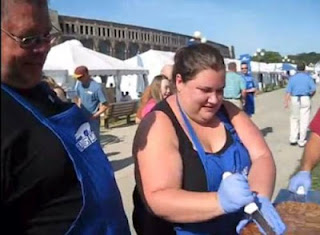 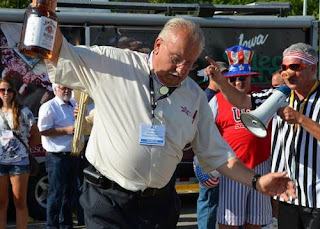 The primary disease I see featured here is the disease of denial. Denial that animals are autonomous beings. Denial that humans are not any more exceptional than the rest of earth's inhabitants. Denial that fear, ignorance, and materialism are the perpetrators of discordant, diseased relations between us and animals. Denial that love, understanding and spirituality prevent the self-imposed diseases of mankind more effectively than any hand-sanitizer, medicine or effort to avoid touching harmless animals.

The only kind of "hands-off the animals" that I support is the kind that gives all individuals within all species the right to not be our products, our profit centers, our pleasure-enhancers, our property.

Maybe the best rule here would be to not go where the animals are housed (unless you can help or comfort them)...instead protest outside the event in the hopes of ending it.

Even if you don't care about animals, with all the diseases and the increasing number of items/stores being added to the XL foods recall list here in Canada, eating meat today is just plain stupid. IMHO. ;)

I agree with you CQ - These folks do exemplify the worst of fear, ignorance, and stuff-gluttony I've ever seen. One can only imagine how vulgar their "celebrations" are off camera. Pitiful that so many beautiful lives are in those greedy hands.

Except to battle that ideology whenever we can - The safest thing is to avoid it like the plague that it is.

veganelder you're speaking the truth again. I know some activists go to these fairs to witness and document what they can... I don't know that I'd want to give these slave-shows a nickle of my life's value...

That's all I've been reading these past few weeks with the comming of fall - All these "harvesting" events and flesh-eating binges. Ugh! It's just absolutely depraved to see with open eyes. Totally repulsive. :(

I appreciate your visit.

Hi HGV - On a very pragmatic level - I'd say your practical advice is worth heeding. From what I know - the attendance at these shin-digs has been declining every year... I suppose that's a silver lining. (?)

I know about that recall too - Canada's largest --- Thousands of tons of "unfit" and dangerous murdered flesh. Yeah! What a way to "feed the world"! :/