Dairy Cows as Partners... Their Sons as Veal

It's been on my mind for a while to mention some ads I've seen in the dairy and pork newsletters. And just while I'm doing so well procrastinating... Freeheal Vegan posts this blog featuring a "What If She Can't Get Pregnant" ad for Bovi-Shield.

Well, now's as good a time as any to let all their ugliness hang out at once:

What if she can't get pregnant and then has to pitch in for the firehouse Dalmatian dog? 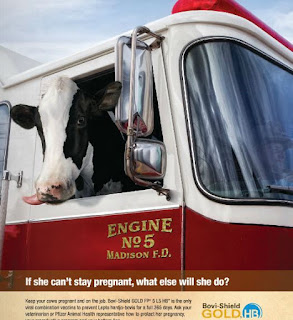 What if she can't get pregnant and then has to resort to giving "pony" rides? 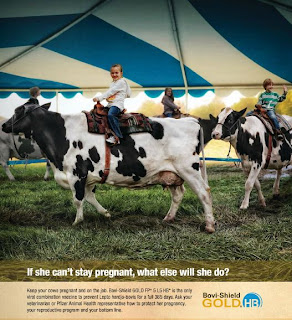 And the ad posted at Freeheal that is the most unlikely - but most vulgar of all - She can help her "master" retrieve shot at, wounded and killed birds! 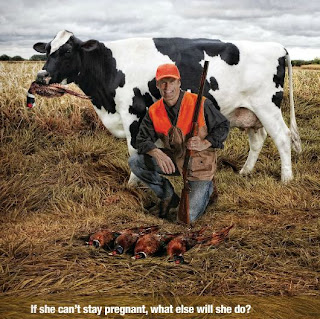 Let's face it... These harmers are fixated in the "husbandry" aspects of the female cow's reproductive cycles - 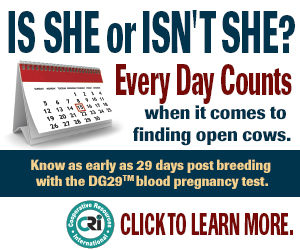 Always waiting for the stork to bring in the next batch of money makers: 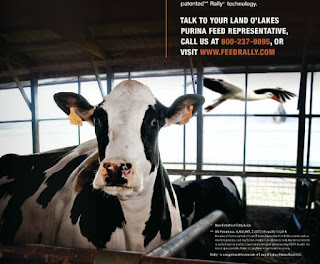 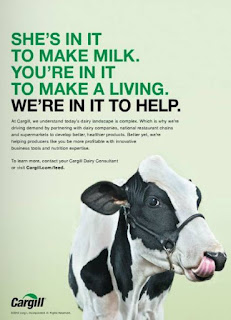 But they're partners though... Right? 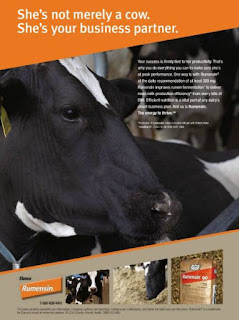 Sure they are! These cows are the most valued of employees! 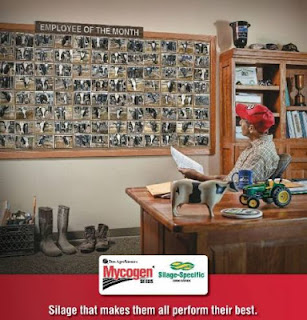 ...But gosh darn - When it's time to "retire" it sure isn't a gold watch that awaits these young, worn out, crippled cows. No siree! Not a full day of mothering even through all those births and they still wound up exhausted and spent from nursing... Go figure! :/

So I suppose it's only right that dairy and meat consumers would feel relieved knowing that the stolen young calves would at least wind up in a happier pasture:

Of course this little fantasy has nothing to do with the truth... Here's just some of the reasons I dumped dairy. If you haven't done so yet and are looking to lead an ethical life as a compassionate, weaned adult --- What are you waiting for?

There's never been a better time or more compelling reasons to align your values with your actions by going vegan. Just do it! ;)

Email ThisBlogThis!Share to TwitterShare to FacebookShare to Pinterest
Labels: dairy

Great post as always, Bea. Man is it hard to feel compassion for those slave traders, mutilators and serial killers. I'm glad you posted that link to dumping dairy. Your good works are appreciated!

You know...as I was going through the post it struck me that one of my main objections to "business" and "corporations" is exactly that personified by the propaganda spouting the lie that the animals were their most valued "employees".

Make no mistake...the "industrialized" horrors of the European Holocaust of human animals is the logical (albeit hidden and unacknowledged) end-point of "corporate" activity toward "employees". It takes no stretch of the imagination to substitute human animals in the place of the victims depicted in the slick propaganda you've shown. The exploitation, the lies, the submerged ugliness....it's all there for the seeing.

You must not behave toward others in ways that...if someone behaved in those ways toward you that you would object to. You must not....we seem to go into vaporlock when confronting this essential rule for living as a good member of the community of life on planet earth. Most of us seem to be blind to this, deaf to this, inarticulate of this.

Bea, I thought I was taxing my psyche enough by reading through all of the hunting rags I do. Although nothing should surprise me, I'm slack-jawed over this ad campaign. How "cute," right? I found it so deeply disturbing, I have a sense I won't sleep much tonight. It's troubling in a way that permeates one's sensibility, different than the heartache one feels over graphically violent and bloody images. I realize it's implied violence and dominion, presented as a whimsical, consensual relationship. Perhaps, then, it's like the effectiveness of horror movies, Hitchock style, where the violence is merely hinted at, not shown. The mind works overtime to fill in the gaps which is what my mind is doing right now. Unfortunately.

May I "like" the five people who have created this masterpiece of a post and the "post-post" comments thus far?

If so, then my "likes" are, in order of appearance but not importance:

(1) each and every individual cow presented here, who for space purposes I shall condense into one beautiful bovine called fire cow, pony cow, dog cow, stork cow, milk cow, business partner cow, employee of the month cow, and tiniest and last but not least, baby male cow

(2) friend-to-all-cows Bea, whose non-stop "outing" of the deceptive dairy industry I never cease to admire

(4) Holocaust-hating, vaporlock-confronting veganelder, whose rightly sees hope in the fear-of-exposing-the-truth LIES that these ads tell

(5) sleepless-in-Seattle-while-dreaming-of-Hitchcock-horror-movies Ingrid, whose disgust at hunting surely deepened when she saw the "vulgar" ad for a pheasant-retrieving canine bovine cow

You're all THE BEST. And all the Bessies of the world agree with me -- and with Bea.

Thank you David! Yes it sure is hard to muster up sympathy for those who blatantly treat these lovely cows as mere utilities. I cringe every time I go to a grocery store and see the endless line of white jugs all gotten under miserable and unjust circumstances. The way the dairy industry peddles their lies is most deceptive indeed. :(

Am grateful for your continued kind words and works as well.

Hi veganelder - On the note that what is done to nonhumans is just a reflection of what's done to man reminds me of the video The Story of Your Enslavement http://www.youtube.com/watch?v=Xbp6umQT58A

We like the cows, pigs and chickens are given just enough freedom not to ever be free - But to always hope we will be. And to always increase the profits for the harmer. In the human case - The governments and/or corporations that "harvest" our productivity.

I agree that there is an admission to some sort of truth when one has to lie. Dairy cows as employees is certainly a tell-tale example... But I'm sure you know the course any lie takes - One always needs to be covered up by two and two by ten.

Perhaps there is a small glimmer of hope that the lies will eventually fall like a house of cards. Meanwhile I'm holding on to optimism in the Stockdale Paradox mode of thinking. In the face of the probability of things not getting any better for those who inhabit this Earth... Hope becomes the only life raft we have.

Thanks for your insights and for providing buoyancy for our raft of hope. <3

Hi Ingrid - I know what you mean about the way these ads are troubling in a different way than graphic imagery is. To me, graphic imagery at least holds an honesty of a truth that I can grasp and assess. I see a death caused by another - I can evaluate the wrongness of it instantly...

But these ads skirt the truth - Everything is vague and implied. You really have to look through it to see the end. Of course most people don't and have no desire to. Even with ads for products they consume directly - I don't think they realize how manipulated they are. For me, nearly all advertising starts off on negative footing. Those using nonhumans in their spiel are particularly unsettling.

The comparison of these ads to Hitchock's deliberate omissions is a great observation. It's so true - It's what's not seen or said that becomes most vile.

Thanks for pointing that out... Thanks for your comment... And for all you do reveal through your amazing photography.

Yes of course Olivia - You certainly may "like" all the previous comments! They're all wonderful and each did bring a particular nuance I hadn't quite reached in my thinking. On the surface these ads just seemed trite and "typical" for the industry. Yet there are layers to consider and each comment was able to peel back yet another that I hadn't thought of... As a blogger and one who loves discovering new angles on right thinking - I'm thrilled when yet more can be said and learned beyond my initial thought.

"This is my brain" (insert image of Grand Canyon) --- Just keep pouring it in! Ha!Ha!

Thanks for believing in and cheering on the BEST in all of us Olivia... <3