The Twelve Days of Dairy Death

The United Dairy Industry of Michigan and The Dairy Princess Cheyenne Saumier in Pennsylvania wanted to remind consumers to eat lots and lots of cheese by re-writing the Twelve Days of Christmas.


And Ms. Princess' version of the Twelve Days praises the dairy harmer as he had to "clean his barn, plow fields, grind feed" Yadda-yadda...

She also includes a recipe for a "White Christmas" pizza that calls for almost 4 cups of cow's milk cheese - Oh yeah and a bit of butter with a few slices of pig's flesh as a topping.

Now I'm no poet but here's my rendition:


On the first day of Christmas the harmer impregnated the cows.

On the second day he removed the cows' tails and horns.

On the third day he lobbied Congress for more money.

On the fourth day he checked for mastitis pus in milk.

On the fifth day he smelled the manure lagoon.

On the sixth day he scheduled next week's cull.

On the seventh day he stole the babies from their mothers.

On the eighth day he placed ear tags on the new slaves.

On the ninth day he chained the male calves up in stalls.

On the tenth day he shipped them off for veal.

On the eleventh day he told a big lie that his practices are humane.

On the twelfth day dairy gave everyone constipation.

So for all you cheese heads and cow's milk consumers - My best advice would be to ask Santa to put (along with your coal) - some of these great laxative products in your stockings: 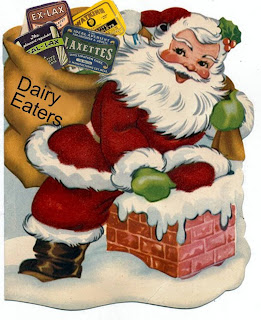 And under the tree: 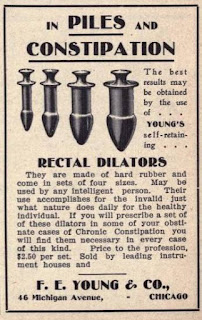 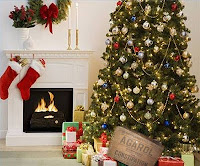 You know... It's really naughty to rape cows, steal their babies, and kill others just so they can "contribute" to your White Christmas cheese addictions!

Even Santa knows it's nice to:

Just do it for goodness sake!

Right on Bea! Well done! You have talents for rhyme for sure.

I hope you send this to the "dairy" princess...although she looks a bit out of it in the photo...she maybe overdosed on death products.

I'm proud of you.

The song says it all! There are several articles today on the Internet about how dairy consumption is down, so the advertisers are going to promote the usual, "health, using happy cows, and a new idea of smaller bottles and as a fitness drink." Not a mention of animal rights, of course. It looks like our battle must continue, but we are definitely getting the word out, as people are switching to other drinks!

Ha, Ha! You made me laugh veganelder! Being "overdosed on death products". But then again - With all that's happened since this blog post... With having a deeper understanding of the core of our violent nature... With re-reading portions of The World Peace Diet --- I'm not laughing so much on what sustains the majority of humans. It's all far more destructive than what could be considered a joke any more. :(

Thanks for always being a strong voice against injustice. You're always an inspiration to me. xox

Hi Bobbie James! I agree with what you wrote... The industry is (finally) having some financial woes as the truth gets exposed to consumers. Sad though what a cushion the USDA gives them in the way of buying tons of "cheese" and other dairy for school kids, hospitals and of course the military. Without that subsidy I wonder --- Would they economically survive at all?

You're right about the battle continuing... Thanks for being part of the efforts to get the word out! ;)