Dairy: The Real Story without the Show

I'd like to unpack a story regarding what happens behind the scenes of a dairy show as told through the eyes of the teens who compete with their "project" animals. I'm cherry-picking the phrases that make me cringe most...

Farm Show after dark: dairy barns never sleep
"When all the people leave, the party starts,"

"there's no question the atmosphere had relaxed."
"It's as if - when the daily throng of jostling visitors emptied from the cattle barns - everyone exhaled."
"Throughout the day, all had been on their best behavior, aware that they were the face of agriculture for tens of thousands of  people."
"While the gates are open to the public, the dairy exhibitors know it's their job not only to make sure their cows are presentable, but also to upend common stereotypes and misperceptions [sic] about farms and farming."

How obvious that what the public sees is just a show! They white-wash the dark side of dairy. If they're holding their breaths to "finally exhale" - It's just further truth that they've much to keep hidden.

Teaching cows tricks... I wonder what the cow remembers of that special way to stand when the man holding the stun gun is her "judge"? :(

"He actually is getting better," said Nell. "He was switching feet and everything."
"You can only lay beside a cow for so long before it gets up."

Why is a "milking cow" being called "he"? Or even worse an it?

The story then goes on about the grooming, clipping and bathing of the cows. All treated like stars! But gee - Do any of these cow "owners" care so much about their "prize" cow when she no longer wins ribbons or can no longer be milked? Do they preen and groom her before she steps on the kill floor? Or do they stop giving a crap about her as they move on to the next animal "project"?

Speaking about "crap"... "If their tails pop up, you'd better start running," she said. If a cow were to lay in it, it makes washing it in the morning all the more onerous."... Is it "it" the tail or "it" the cow? 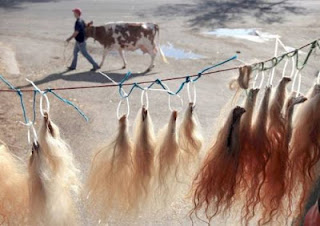 "In a few hours, the doors will open, and thousands of people will begin streaming in to experience the sights and sounds of the Farm Show."

But it's all a show - isn't it? A big pretend, fake lie of omissions that keeps the public unaware and those in the industry safe behind their theater of illusions. Here with no primping, no spotlights or pretensions Mercy for Animals offers the Real Story:

Liars and killers...hiding and hurting. Despicable.

Veganelder says it all.

I agree veganelder and Olivia. I can only hope that they hurt themselves. Somewhere inside their narrow world view there is a conflicted monster that lives in a twisted, destructive, life-hating existence. And if that's all they see - That's all they get. And more than they deserve.