Using My Imagination For a Vegan Chipotle

By now I'm sure every one's seen or heard of Chipotle's Scarecrow video. When it first came online, there was a shout-out from fellow activists and youtubers to keep the dialogue open and to make attempts to keep our thoughtful voices and views heard.

If you scan the discussions that took place in the last few days, it's evident that ranchers, and those in the industry feel this video is a betrayal to the "responsible" way they "raise food". The GMO issues weren't debated half as passionately as the ones regarding "humane" animal use. This is encouraging.

A lot of viewers also had their hearts shattered at the image of cow #53281. I think these sad few frames in particular made people question not only the harms done in meat consumption... But those very dark ones, hidden by the "happy-cow" dairy industries. 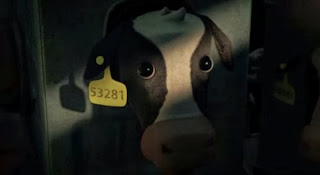 Now there's a lot of people wondering what Chipotle's angle is in this campaign... I don't assume for a moment to know the inner workings and figurings of any large corporation. Of course their end is to drive more business into their doors... But aren't the future customers they're appealing to plant eaters? The beginning is ugly and shows miserable animals being used and the story ends in a meal served that could very well have been vegan.

For as beautifully arranged as the music is... As picturesque as the fresh pepper on the vine appears... As magical as all these visually artistic scenes are - There's no chance that a vision of a better tomorrow could ever, ever include snuffing the life from our beautiful fellow Earthlings. That's simply beyond any one's imagination of paradise. I'm hoping for the real deal... There's nothing to it!

I imagine there are a lot of people who saw the dark image of cow #53281 and no matter how hard they try, can't quite forget it. It feels almost blasphemous wishing other beings to feel uncomfortable, but I hope the image moves them to action. If they want to know about real discomfort, they should ask 53281.

I think this video got people to think a lot, but unless there was a Chipolte’s near them so they could go buy a meal or two, they would not change their ways at all. It’s my experience that most of the people (excepting those who start a new diet) who talk about the need for human meat, rarely if ever buy it. At first when I saw this video, I was hopeful that they were talking about people becoming vegan (I saw the pepper symbol), but no, that’s not the case. They don’t mention the male baby chicks in this video, do they? Or the slaughterhouses? Or the fact that some of the humane certifications allow pigs and chickens to be kept indoors their entire lives?
I looked on Chipolte’s web site, and they say they use meat that is from more humane farms as much as possible, and try to buy local when they can. In other words, they also use meat from factory farms and get whatever they need for their business.
I also noticed some other product (I think it was Farm Fresh) was advertising humane farms. They are catching on that this is a good advertising ploy, and I hope some things will improve from people seeing the video, but it’s only a start.

Hi David! It's true we can only hope that projects like this, even though they stem from corporate intentions, stimulate consumers to question. I'm with you on listening to the victims! Thanks for sharing your thoughts.

Hi Bobbie - I know exactly what you mean about these companies that push the "humane meat" ideal. And you're right too that they don't even go near the egg/dairy issues.

The only thing I'm thankful for is that this ad opens up dialog. As I mentioned the comment section on the video was constantly updated with someone else's take on what they saw. I only wish there had been (or could be) more advocates to squish the lies when they were presented... But I think the few vegans that entered the conversation, stood their ground in a very meaningful/productive way. I received many personal messages wanting more information. We can only hope right?

Thing is to not ever settle for the placebos of "happy" animal products. They just don't exist. And Chipotle (no matter how it's spelled) would do great in forging ahead with a progressive, totally vegan establishment. Yep. That's my wish! ;)

Thanks for your visit. :)