A Tradition Of Compassion - A Vegan Heritage 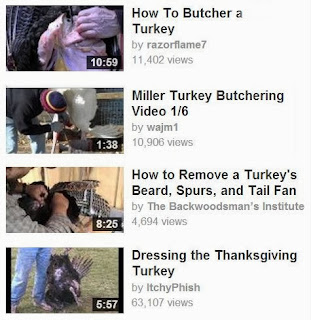 Or you can make a new ones: In Thanksgiving For the Birds, Colleen Patrick-Goudreau eloquently debunks the myths around the "traditional" foods surrounding Thanksgiving.

"Most people don't know that our contemporary customs at Thanksgiving, namely the serving of turkeys, were shaped and popularized by a magazine editor, Sarah Josepha Hale, in the mid-1800s. Whatever meaning we attribute to this Thanksgiving holiday is most certainly not lost (in fact, it is enhanced) by creating food-based rituals that affirm rather than take life, that demonstrate compassion and empathy rather than selfishness and gluttony, that celebrate the fact that no one need be sacrificed in order that we should eat."

And in Talking Turkey she speaks truth to power: "If you've never met them, turkeys are magnificent animals, full of spunk and spark and affection. I've introduced many people to the critters at farmed animal sanctuaries, and the animals with whom people have the most transformative experience are the turkeys. Every time. Never fails. Join me as I tell some stories of special turkeys I've had the privilege of meeting and as I explain why I'm still making amends to the animals, whose breasts, legs, and wings used to darken my dinner plate."

*****
“A farmer gave his son a hatchet and a turkey saying, "Take this bird out behind the barn where no one can see you and kill him.”  Being an obedient son, the boy vanished behind the barn only to return several minutes later with the still very much alive turkey.  “What is the matter?” asked the farmer. “Did you not understand my instructions?”  The son looked his father in the eye and said, “But Father, everywhere I went the turkey could see me!” The son in this story has made the shift in awareness that we feel the people of this world need to understand. Just because a sentient being cannot talk does not mean they don’t have a point of view on whether they live or die.”
Seth Tibbott
President and Founder
Turtle Island Foods and Tofurky

You can read about Seth Tibbott, who has literally saved the lives of millions of birds, here, here, and here.

photo courtesy Leilani Münter for The Ghost In Our Machine

Thanks to all who have made compassion

part of the vegan heritage. :)

All of those who share life with us can see us...all the time. "...everywhere I went the turkey could see me!" We would do well to remember this.

Thank you Bea...for all your compassion and caring. A happy Thanksliving to you and yours. :-)

Thank you, Bea, for always advocating on the side of compassion. I wish the idea of compassion were the baseline for all human actions, policies and decisions.

Wishing you a beautiful Thanksgiving in the spirit of traditions you've created in your own life. I need to get busy with that mushroom-walnut loaf for my evening with omnivores, some of whom are ambivalent ... :)

Thanks veganelder - I sure agree with you that "All of those who share life with us can see us...all the time." And probably most importantly we have to look ourselves in the mirror. There's no escaping the lies we tell ourselves. I feel so sad for those who perpetuate the violence and still search for peace.

Glad you found yours. Thanks for spreading the good around in the way you think and live. Hope you have an amazing day of happiness. <3

Hi Ingrid - Oh gee if there ever was one who has been able to put the right and real spotlight on our beautiful feathered and furred friends - You do! The images you continue to capture and share should shake any viewer into regarding these lives with respect and care. Thanks for always representing our fellow Earthlings in the honest and best way that you do.

I hope your mushroom-walnut loaf and everything surrounding your day is joyful, rich and beautiful. And more importantly, I hope your celebration is filled with peace. <3

Great blog. Very thoughtful and piercing,and a great voice for suffering animals. Thanks.

Thank you lane725! I'm grateful for you compassionate voice as well.