Chickens, Tornado-Trophies and Other Twisted Ironies 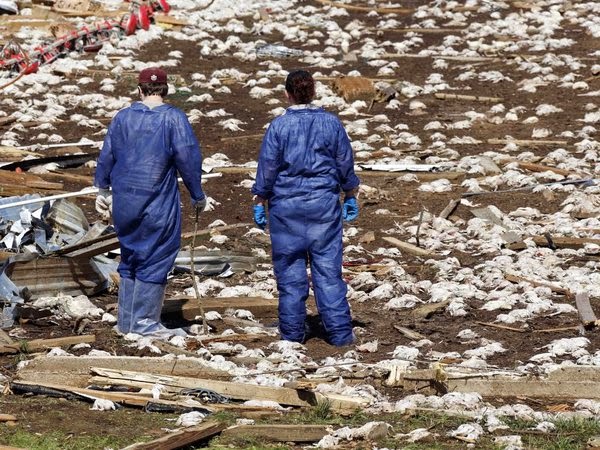 This sea of white feathers and dead bodies is a scene from the devastation left by recent tornadoes in Mississippi. The article headline says "scores" of chickens were killed.  Then it continues that out of more than 220,000 birds "few remain alive". I'm not going to nit-pick this little inconsistency - But it's there. And this isn't the only "poultry" facility that's been destroyed. Tyson owns around 1,500 such warehouses in Miss. alone.

According to Meatingplace Tyson Foods has deployed cook teams to help feed the relief workers left to clean up the debris and corpses. The irony here of course is being surrounded by carcasses and eating them at the same time. It would be so helpful if Tyson served vegan meals instead. But you know that's not going to happen... I landed on this other image at Weather.com as I was checking to make sure folks I love in the mid-west were okay... They were and are - Thankfully. But this scene struck me on so many levels... There's an irony to a trophy deer head that survives a twister, but whose body was ravaged by a single shot... There's also something perverse in wanting to save such an item that represents such loss. Loss from the sad killing and loss from the vicious storm.

I also think what it must be like for countless nonhumans everyday whose habitat and homes are devastated by bulldozers and other razing machinery... And those who dodge bullets and live in fear of the human-made destruction. Surely we have made a wicked world for them. :/

Now all this is not to say that I don't have profound sympathy for human loss as well. Every which way it's tragic and that's just my point. With all that is unfair in life; With all that is unkind and violent in nature... Do we have to add to it?

You can do so much to reduce and avoid the twisted harms in life by simply living as an ethical vegan. Thanks and safety to those who are living in such a way.

"We have made a wicked world for them." Truer words have never been written.

The most telling question of all is "Do we have to add to it?"

The horror/irony of the grotesque souvenir being "saved" is indeed bizarre. It sums up so much about human animals that it overwhelms me.

Everyone should remember that in times of natural disasters both the rescuers of the free living animals and of the "pets" are often swamped with victims...don't forget to help/thank them too whenever you can.

What a disgrace, no emergency alerts for the animals!!!

So sorry for the delay in a reply... I've got something very messed up in my notifications of other blog posts and notifications of my own. Yikes! The "convenience" of the information age.:/

veganelder - The deer head is an ugly thing to save isn't it? I have a quick tale to tell about a yard sale I went to this past Sat. There was a deer head for sale... The neon-colred price sticker was on the glass eyeball. They were nice enough people I suppose... But in my mind at the moment they just represented the absolute most depraved part of all of us. To reduce such beautiful free life to this. I do a lot of crying in my car sometimes. :'(

You make a good point about the rescuers being overwhelmed after a crisis. Usually they have their own homes/lives to put in order... And then there are the other victims too.
Thanks for that reminder - And your thoughts.

Hi Maria! No the other animals don't get any alert. Not for bullets headed their way or for storms. Seems like we ought to treat life like it matters because it surely does... Thanks for your input...

Yes, exactly this: "With all that is unfair in life; With all that is unkind and violent in nature... Do we have to add to it?" This should be the boilerplate response to anyone who defends practices like hunting with rationalizations about other ways animals are injured and killed. We already cause such a wretched amount of ancillary harm through our behaviors and technologies, it's beyond gratuitous to inflict harm deliberately.