Drover's Dreary Defense of Murder on a Factory Farm

And on the heals of Death on a Factory Farm... Summing up Drover's flim-flammed efforts of damage control:

Drover's: The bigger issue, of course, is that the film highlights the cultural divide between what is acceptable to livestock producers and what is deemed shocking to our customers.

The "divide" is that once the truth is exposed, livestock production is unacceptable to our culture... Yippee! We're evolving!

Unfortunately, there are a lot of things on a farm that are just not pretty. 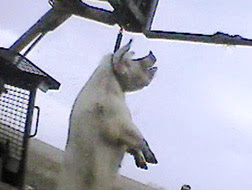 We're being placated... Of course "death" is not pretty, but the flippant comparison to this kind of intentional, murderous killing is grotesque.

And people like “Pete” will continue to exploit that in an effort to promote legislation at the state and national levels that will make livestock production more expensive.

Really now, Pete wasn't "exploiting" was he? He simply provided information that was and is rightfully due to your patrons. Information that by the industry's own admission, is important to your customers. What does it say of an industry that criticises efforts to expose these truths? And what do we say of an industry who's only concern is blood money made from cheap meat? I'd say their industry is vile. And that their trickery for profit, is deplorable.

“Death on a Factory Farm” drew attention in an unflattering way to some issues livestock producers face everyday.

"Unflattering"? Boy if that's not marginalizing! "Some issues"... like whether to hang your pig or electroshock at the slaughterhouse? Both are entirely unjustifiable and equally as heinous.

In the end, the judge decided those practices were not illegal.

Of course nothing was illegal - there are no laws! In fact the very lawlessness (and secretiveness) of the "food animal" business is what allows it to exist!

That doesn't make them acceptable.

And I say that the whole of it is unacceptable from the breeding of "food animals" to their butchery.

We must continue to demand a zero-tolerance policy on animal abuse,...

"Demand"? Who are they demanding from? The very business that they are part of... That's shifty. Abuse" = to treat badly - I'd say killing would be defined within that concept. And let's fess up - the whole *meat* industry is about the killing - hangman or stun gun operator - It's what animal agriculture is all about, it's about victims.

and we must work every day as if “Pete” is watching with his hidden camera.

It's not really Pete that Drover's or the meat industry is worried with at all... Pete knows already... He"s seen and formed proper conclusions, he's vegan. No, the industry worries most over those who are watching Pete work and learning from what's on his camera. killer of animals - your product is very disposable... Go vegan

It's National Agriculture Day! Grill a steak and thank a farmer for feeding us today.

Ironically, it's also National Meat-out Day... celebrating 25years... Looks like nat ag day had to do some damage control there too... being that it was begun 8 years after.

Perhaps it is because it's the first day of spring? Honestly, what person in their right mind wants to celebrate the rebirth of life - with death on their plate?

And I do indeed thank all the vegetable growers who feed us very well... In fact, I was just about to go to market and load up on everything that's best for me to eat :)