Was it something I said? Here's what happened. Last night, I was watching this wonderful movie - Defiance. Without giving away this true story... it's based upon the lives of hundreds of Jewish, Nazi refugees who escaped into a forest and lived there for over 2 years. While they lived in these woods, there were desperate situations without food... Through the desolation of subzero winters; they were all starving... Any attempt to procure food from a distant village, would risk death to those who tried, and possibly expose those who remained hidden. Meanwhile members of the group were dying - from the elements and from starvation... At this point in the film, we all took a stretch break... and I stated what I thought was the obvious: People dying... People starving - You fill in the blanks... No, I was not talking about the horrific act of man killing; these lives were already gone. They already paid the ultimate price for birth... and left behind a dead, unfeeling corpse - which could save lives. And I didn't mean to be upsetting either... only that this seemed like an obvious solution in this situation of survival... Yet my suggestion was met with absolute repugnance! And I agree totally (to the extent that I consider any flesh unappetizing)... But we were discussing humans eating humans for the lack of anything else. We weren't examining the sadistic depravity (or violence) that's needed to satisfy the appetite of a Dahmer. No, this scenario I presented, had no innocent victims... Just a group who's only option at life was to consume the dead... the human dead... I brought up the soccer team whose plane crashed in the Andes. Their story, told in "Stranded", accounts for their experiences of survival. The most desperate was their need for food. And under this circumstance, they had to redefine what (and who) becomes "food"... But again, they had no choice. In order to survive they had to eat. And most people, if they are honest would say they'd do the same. There really is no ethical problem here... Need and survival trump everything... And even if the "harm" were in the "desecration of the sanctity" of (human) life"... still, it was done for the sake of saving human life... and would be justified by most as "necessity". Yet, this group of people, who winced at human flesh eating, even through non-violent necessity, are the same ones who have no compunction to cause horrific pain and suffering, and the greatest of harm to innocent beings... through the foods they choose to consume. Not for survival or for lack of any other option... but for whim and trivial fancy. For taste. There is absolutely no "survival" issue for this group of people... They represent and share in the abundance of civilization... and the easy array of choice. Still, they accept (and encourage) in each other, the social license to kill the innocent - for pleasure-- 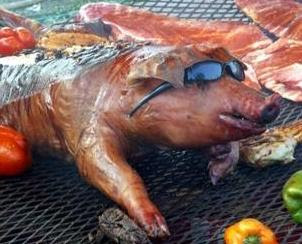 And I am the barbarian for suggesting eating a human corpse... for survival? Twisted.

Defiance is indeed a very very good movie. I think anyone faced with a situation of eating dead human flesh or certain death via starvation would choose to survive. It is after all human nature to choose survival!

The response you received is just another example of how we humans don't want to face some simple facts about ourselves. As Klem said, self-preservation is in our nature. It's part of how species are engineered to survive. Many of us humans, though maybe not all, would do whatever it takes to save ourselves in life or death situations.

We also kill and inflict pain for pleasure, lie, cheat, steal, manipulate, etc. But humans still want to believe that we are somehow special because of either 1) our intelligence or 2) being touched by God. We can't bear it when something doesn't fit into that idealized view of ourselves.

Yes... we are generally speaking in a rose-colored state of denial -But too... since the truths are so unbearable - where is the motivation to "know"? No one wants to voluntarily be a "witness" to a crime they are committing. It's just not in our self interest to acknowledge unpleasant things. And too... being touched by God - sure absolves us from nearly any atrocity.

Hi Klem... Not a doubt that everyone would choose to survive - isn't it our most powerful instinct?

I remember reading the story Alive - about the soccer survivors decades ago... Even then, as grizzly as their fate was -- I understood the necessity of their will.

But now... I also understand that all creatures possess this will and want of their lives... To take it without cause seems all the more a violation of the good.

No conflict for me... In order to do "no harm"... I would eat the already dead corpse any day over (killing) the living rabbit, deer, horse or cow...

Thankfully, we all have a choice 3 times a day! :)