I've seen it time and again throughout the years... A community is either fighting to keep a slaughterhouse away from their neighborhood.  Or slaughterhouses are being built (under protest) with the grace of tax dollars: like the 2.3 million dollar tax break given to a JBS slaughterhouse in Michigan.  Or the proposed 16 million for a hog slaughter plant in Illinois.  Or the $600,000 for a Vermont slaughterhouse... Just a quick search will bring up many more.

I remember a hog slaughterhouse close to where I used to work in Secaucus, New Jersey.  Even though the facility was 20 miles away, by 9 a.m. the air was drenched with a most god-awful odor. The stink just hovered around you... Even your food tasted like the smell.  And the closer you got to the place the nastier everything became.  The flies got thicker with each mile.  So did the trash on the road... The houses block by block appeared more like a "dump" than a neighborhood.   The stores were ratty looking and the infer-structure of the roads was in sad need of repair.  Crime rates escalated too... The closer you got to the slaughterhouse the more dangerous it was for both human and nonhumans. 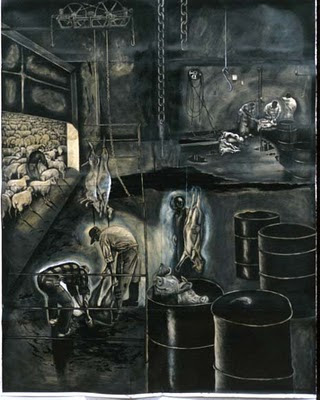 It took me decades to connect the vileness of the slaughterhouse to the food on my plate... But the smell of death never disappears from my memory.  I'd recognize that putrid stink anywhere.  So believe it - If you're a property owner or real estate speculator you'd be wise to invest your money elsewhere.  Because really... No one (even meat eaters) want's to live near a "packing plant".

Interesting link on vertical farming. From what I can tell, his vision seems to omit animal agriculture? Perhaps because animal-derived foods can't possibly be a part of a sustainable food system. The future of our food must be green, smart and clean. Not bloody, wasteful and barbaric...

Hi Jo - Of the examples I've seen thus far, yes, it does look like most future food systems focus on plant based "sustainable" nourishment. Could you just imagine the complexity and bio-hazards if they were to be foolish enough to mix "animals" in with the process? I've seen only one vertical farm proposal, that has a floor dedicated to "chickens" as food... I get the idea though - that given enough time/resources "vat meat" would replace any "livestock" processing with ease!

Ditto on Sue Coe... a favorite of mine too - along with other talented vegan creators! ;)