Truth is stranger than fiction so they say... It really becomes obvious when you read articles like this from the American Veterinarians Medical Association.  The spokesman for the livestock industry... The one who is supposed to be the "ethical" voice of animal agriculture suggests that "AVMA should abandon advocating for the human-animal bond in favor of fighting for the right of animal owners to use animals as they choose, whether that entails companionship, food, or labor."  Translated: Vets should encouraging people to stop having empathy towards nonhumans.  That's right! He's saying that "the veterinary profession, by emphasizing the importance of the human-animal bond, enables consumer hypocrisy, which is exploited by animal protection organizations."

I mean, just on the practical end - Isn't this about the most strategically short-sighted bit of advice one could give their constituents? Really... If vets tell their patient's guardians that there's nothing all that special about Scruffy or Mitten - Won't they stop caring if shots are up to date?  Won't they stop spending their money on their now "insignificant" companions?  I mean - What's the motivation to invest in the care and well being of somebody if you don't love them?  If there's no valued relationship between one's "pet" as a treasured family member... Why bother with the vet bills?
I guess this odd piece of (desperate) "advice" ranks up there with Mr. Jamison's other doosie of an idea.  Out from the bag of best tricks animal ag has, Jamison pulls out this blunder of recommending slogan shirts that read "Happiness is a Dead Animal".  So bad and so embarrassing an idea was this, that Hoosier Today pulled the original article. ---Fortunately, there are countless witnesses to document that the asinine faux-pas actually did occur: Veg Daily, xomba, Kim Stallwood, Extra-Veganza, PETA... Still, Hoosier Today did a presto disappearing act on the flubbed idea - Just like it never happened. 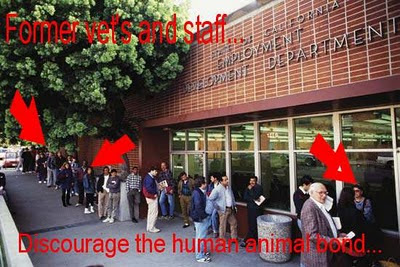 I suggest the AVMA might do the same regarding Jamison's latest advice as well... Cuz if you start telling people not to care for the animals in their trust... If you recommend that ---
Well, you might see a lot of vets on the unemployment lines.

I have no idea what Jamison gets paid to be the "ethical" voice for animal ag... But I'd probably consider contributing to his salary being that he does far more harm to the livestock industry than not.  Thanks Wes! A pleasure to exploit your callous ignorance! :)
If you believe as I do that animal ag's "moral high ground" is vanishing in the now civilizing world... Opt for the ethically consistent choice: Go Vegan.

What a creep. Too bad the AVMA journal article doesn't allow comments.

Many of the worlds problems could be solved by this example. Just stop caring!

Yeah... He's a creep alright. But I do get the idea that should the opposition be willing to pay him his silver coins he'd be just as quick to alter his "ethics" that-a-way too.

The thing I try to recommend to anyone who cares for nonhumans is to educate your own vet as to what you consider appropriate treatment to animals. There isn't an occasion I don't leave my vet without giving her new vegan & animal rights information... Compared to a year ago - I think I'm making great progress to my dream goal: A vegan vet! ;)

sulay:
"Many of the worlds problems could be solved by this example. Just stop caring!" BRILLIANT!