April Fool! Animal Use - The Last Laugh Is On Us!

April Fool!  This is just a little day among all marked calendar events.  Meant to be harmless and silly - It's a day dedicated to jokes and pranks...  And I do understand a good laugh.  Laughter is "good for the soul" - Right?  Along with that notion I've also heard that one shouldn't take one's self too seriously.  If you've ever been the brunt of a set-up, and the ha-ha's were at your expense, the perpetrator will say they were just "kidding".  But most often this just kidding "apology" is not meant to be sincere at all.

And I admit as a vegan I am often dismayed and saddened at "jokes" meant to make light of some very grave things. 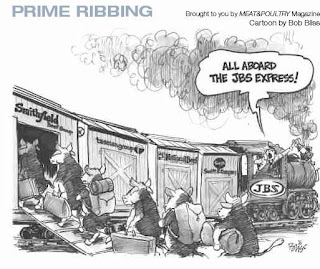 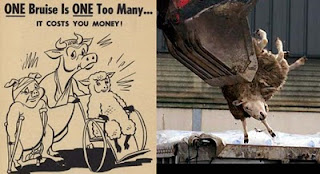 But here's the peculiar part with the way animal industries (and culture) have "fun" with animals as their subject matter. 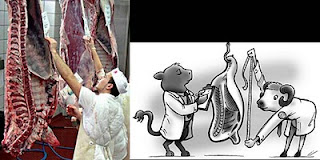 The joke is all backwards!


The "trick" doesn't happen and then everything's sort of okay again, like with an April Fool's joke.  No harm. No foul. No! It's the exact opposite!  We deceive them and ourselves that their best care and interests are important.  Even paramount.  At the onset we teach kids that these farmed animals are our friends. Friends that deserve kindness and loyalty.  Everything at the start is so even and fair... No mischief or harm could ever be expected!

And then the punchline comes!  The biggest "joke" on them that there ever could ever be!  With false pretenses of "fair play"... We lead them to the kill floor and then we say "Ooops! Just kidding! We didn't really care that much about you at all!"

Sadly the joke is on us.  The effects of this in-side-out, backwards trick we play on our fellow creatures contaminates everything in our "sorry", kidding and kidded culture.  We cannot be happy with such a lie of this magnitude. It is only an illusion that has not been examined in full light of reality.  And those who wish to remain blind to it, ridicule their own wisdom.

Please do not be a fool!  Animals do not wish to die for us. We don't need to kill them.  And we certainly don't need to laugh at how "gullible" they are to trust us.

this internet site is my aspiration , rattling good style and design and perfect subject material .
Helped me a lot, just what I was searching for : D.

You continue to amaze me with the number of ways you find to present this tragic topic in a way that appeals to and awakens the conscience of every consumer, Bea. Or will one day, when they are ready to be appealed to and awakened.

What a tragic joke to play on our innocent little friends, who are so trusting, so affectionate toward whoever gives them a shred of civil attention.

And yes, the joke is on us. We remove ourselves further from our inborn moral compass every time we pay for the shrink-wrapped remains of a "someone" who matters. Not just once mattered, but continues to matter: the lovely qualities -- loyalty, integrity, serenity, playfulness, sweetness -- of each creature are fadeless. Forever.

Yes, every time we ingest a piece of flesh or an ounce of cow's milk, we are rejecting the true essence -- the spiritual substance -- of every animal on earth. That is surely our loss.

Your words are priceless: "The effects of this in-side-out, backwards trick we play on our fellow creatures contaminates everything in our 'sorry', kidding and kidded culture. We cannot be happy with such a lie of this magnitude. It is only an illusion that has not been examined in full light of reality. And those who wish to remain blind to it, ridicule their own wisdom."

Your insistence upon telling the truth and living the truth, Bea, reminds me of this Science and Health citation (p. 453):
"Honesty is spiritual power. ... You uncover sin, not in order to injure, but in order to bless the corporeal man; and a right motive has its reward."

I never did like April Fool's Day. Tricks and pranks aren't my cup of tea. And the tricks played on us to accept animal use/abuse as normal? Ugh.

That first cartoon was in very bad taste I thought -- reminded me of the Holocaust. :(

I second that emotion. Go Vegan!

Another great post and what you wrote about kids being taught that farmed animals are our friends when in reality they are treated as anything but is something that I'm struggling with a lot sometimes lately. I'm not a mom, but I have a lot of nieces and nephews now and while I really, really do love to get pictures of them, some of the photos are from zoos and farms and it causes as much pain as it brings me happiness to see them. I have one niece in particular who maybe one day will be vegan, but the reality is, it took me 41 years. Forty. One. Years. And I always really believed I was an "animal lover". Yep, the joke is on them and I hate it that I was part of that joke. All of us vegans 'get it' now and we all struggle through these same feelings and it does help me to know I'm not the only one....but it somehow is still a really lonely feeling in a way. The good thing, the important thing is that we are all doing the right thing now. At least we're not part of the 'joke' anymore.

Hi SBH CLAY - You know... most people say I just think too much! Ugh! I guess in comparison to the many that choose not to think at all that's an easy condemnation of me! :(

You say it so well: Removing ourselves further from our inborn moral compass --- Oh how true!

And no... For sure I don't want to hurt anyone - That's not my, or anyone's goal who speak on behalf of fairness or kindness. If anything - Just like you and so many others, all I really want is all the harming to stop! (someday...)

But I'm thinking it may have taken you 41 years to figure it out... And me over 50... And many of us half our lifetimes - But we didn't have savvy aunts and uncles around now did we? Maybe things will be much better for your neices and nephews and their friends too as we evolve towards a kinder, more informed world? We've got to be making a difference! I'm really sure of it!

I suppose the best any of us can do is to lead by example. To try to be as happy in our decisions as possible. This might encourage kids to want to know more about this consistent and truly respectful way of living?

You are very right - That the most important thing is the here and now... And that we have been able to figure things out for ourselves. And the way I see it... Probably both you and me and millions of others were just strutting along when this "reality" found us --- It will happen to more and more people as time goes on. It's not all foresaken - Not by a long shot! It really has all just begun! We're doing the right thing Krissa --- Head high, chin up - We've got truth on our side and I can't think of any power more convincing than that! <3