There really is no nice way to put this... The corruption is blatantly obvious.  The USDA just gave the dairy industry $1.1 million dollars so that they may explore more effective ways of communicating to customers how great cow's milk is. :/


That's not exactly how the grant reads... But it's the gist of it.  And you can draw your own conclusions here.


Now... Wanna see something FREE that shows how wonderful some people think cows are?


Today's Happy Veggie Kids post on vegansaurus highlights 6 year old Ruby Bird as she embraces the gentle giant beside her: 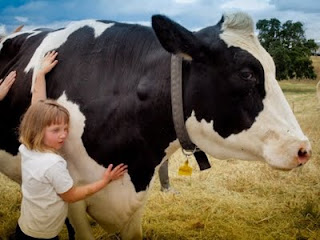 I don't think there's enough money in the world that could buy the honesty this photo displays.

I wonder if vegan outreach can get some bucks for spreading the word about veggies?

What a farce so many agencies and groups have become. Sad and bad.

That's not corruption. It's in their mission.

Consumers are catching on to this fact: the dairy industry is unsustainable. To prop it up with a million dollars from taxpayers is arrogant, negligent, cruel, and even suicidal.

Don't get me wrong: dairy farmers are for the most part decent, kind, salt-of-the-earth men and women. But instead of continuing to fool themselves and their consumers, it would be better for all if they switched to another line of work, where their fine qualities can be put to use in a way that truly serves the environment, animals, and humanity.

That all can be true, but it's not corrupt. Check your dictionary.

Calling it corrupt undermines the true meaning of the word and the cause of all the people who face real corruption.

Speaking of non dairy milks. Are you guys aware that silk switched to non-organic beans long time ago and didn't change their label. Just want you to know if you're eating GMOs and contributing to the horrors of glyphosate.

Love the photo. And the series on Happy Veggie Kids!

veganelder - I'd say not a dime for vegan outreach. In fact, I see that Canada has passed legislation that prohibits "non taxable status" to any organization that doesn't "benefit man". Scary future on the horizon for other countries to adopt the same.

Hi CQ - Thank you for your smarts and for addressing Anonymous further than the extent I am willing to do!

Time is much too valuable to dedicate to a troll.

*************************
Have Gone Vegan - The photo does show inter-species love beautifully doesn't it? Looks like the Happy Veggie Kids is on/off for a while... I can understand why some parents might be reluctant to put their children in the lime-light on line - It's one of the consequences of the world we're in... (sigh)

Thanks for the visit and keep vegan on!